Critters Attack! is a 2019 horror comedy film produced & directed by Bobby Miller (That Movie Show, The Cleanse, & Holiday Road). It was written by Scott Lobdell (Happy Death Day, X-Men: The Animated Series, & Godzilla: The Series). It was filmed in South Africa. It’s the first Critters film to be Rated R. It’s the 5th film in the franchise plus they made a television show on Shudder called “Critters: A New Binge”. It will be featured on the SYFY channel in October. 20 year old Drea (played by: Tashiana Washington from Shaft, The Great Pretender, Straight Outta Compton, & Gimme Shelter) reluctantly takes a job babysitting for Professor Lacy (played by: Tanya van Graan from Tremors: A Cold Day in Hell, Death Race 2/3, Lost Boys: The Thirst, & Starship Troopers 3: Marauder) who works at the college she wants to attend.

Struggling to entertain the children Trissy (played by: Ava Preston from Rusty Rivets, I’ll Take Your Dead, Little Italy, & The Kennedys) & Jake (played by: Jack Fulton from Shadowhunters, Detention Adventure, 12 Monkeys, & Hemlock Grove) with her own little brother Phillip (played by: Jaeden Noel from Killjoys, The Show, & Odd Squad), she decides to take them on a hike. Unbeknownst to her, the mysterious alien Krites have crash-landed & are devouring every living thing in their path. A stranger named Aunt Dee (played by: Dee Wallace from Critters, The Howling, Cujo, E.T., Popcorn, Red Christmas, & The Frighteners) shows up to help with their disastrous critter problem. She has a questionable history with the hungry intergalactic beasts. Can they save the community from total destruction???? 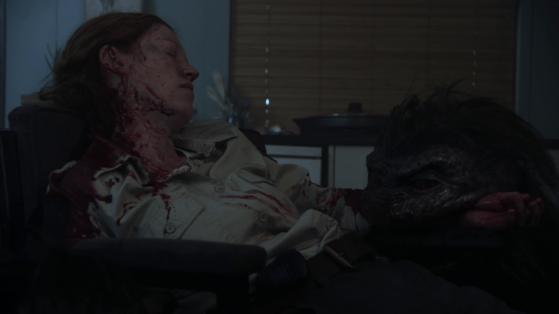 I am a huge fan of the Critters franchise so I was very excited when this was first announced. After being a little overwhelmed from A New Binge, I wasn’t sure what to expect with this brand new film since it’s been 27 years they produced one. I am happy to report that it was much better than the Shudder mini series. Before all the Critters films were more family friendly with their PG-13 ratings but Critters Attack! doesn’t hold back & it’s actually Rated R. The gore & special effects are the true highlights here. This low budget feature knew what the fans wanted so they made sure to focus on those departments. I enjoyed seeing the Critters upping their game when it comes to brutality & gruesome moments. This sequel took a page of the Gremlins book with the new “good” critter character in this.

It was something different from this horror series & I thought it was a nice change of pace for the overall franchise. The script was fun & entertaining, Critters Attack! keeps you glued to the screen for the whole running time without a single dull moment. It’s one of those films you need to just turn off your brain & be entertained by it. This had a good balance of comedy thrown with the dark moments. The whole cast was solid but nothing special here besides the legendary Dee Wallace. She had a blast with this one & chewed the scenery like never before! This was a great role for the iconic actress & honestly she was the main reason to see this besides the Critters coming back to cinema after all this time. Don’t take Critters Attack! serious & you will have a good experience with this low budget follow up, RECOMMENDED!!!!

Let’s talk about the high definition presentation from Warner Bros! This 1080p (1.78:1) transfer looks really good especially for it’s low budget. They made sure to use their money wisely on this feature so it does look much better than you would expect. It has two different audio options which includes English: DTS-HD Master Audio 5.1 & Spanish: Dolby Digital 5.1 on the release. All the dialogue sounds very clean. The horror & action are amped up on these tracks. The music has a killer boost to it. It has a variety of subtitles which includes English SDH, French, Danish, Finnish, Norwegian, & Swedish. Both picture & sound shine on this, check out the blu ray over the DVD. 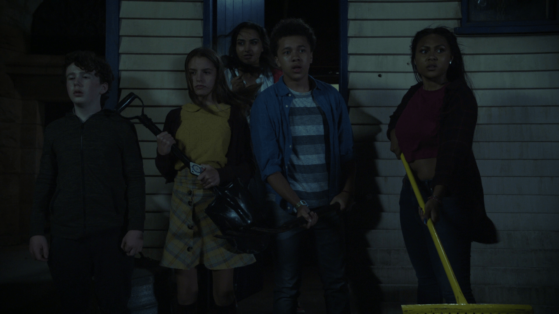 Let’s discuss the special features from Warner Bros on this blu ray disc! “Audio Commentary” with director Bobby Miller & Marty Krite. It’s only 6 minutes & it basically just covers one scene. It’s done for fun & it shouldn’t be taken serious at all. I was kinda surprised that it wasn’t a full commentary about the whole production. “Engineering Gore: Designing Critters” is a little over 8 minutes. It has interviews with director Bobby Miller, actors Dee Wallace, Jaeden Noel, Jack Fulton, & various members of the production. They go behind the scenes & show you how they put together the Critters. They tell a few secrets about it. They chat about wanting to make them more like the first few films compared to the last few because they were scarier in those. They talk about the brand new Critter character & bring up all the stuff that makes her different compared to all the other evil creatures. “Critters : An Out-of-This-World Experience” is almost 7 minutes. It has interviews with director Bobby Miller, actors Dee Wallace, Jaeden Noel, Jack Fulton, Ava Preston, & Tashiana Washington. It has all kinds of behind the scenes footage. Dee Wallace says fans will be excited to see her in a new Critters sequel. They chat about doing real fx rather than CGI. It goes over the variety of blood that they used for all the chaos here. They talk about working with director Bobby Miller & their experience on the film. “The Critter Ball” is almost 2 minutes. They talk about using the iconic Critter ball in this new sequel. They being up some of the old Critter heads were actually used in it & make a cameo in this. They mention the big scene with it. It has a few trailers from “Warner Bros”. It also a slipcover, a digital code, a survey on the film, & a DVD copy of the release. It’s available everywhere right now, CHECK IT OUT!!!!