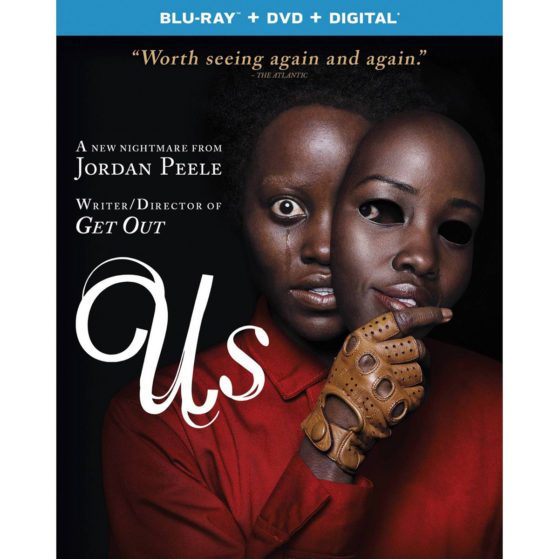 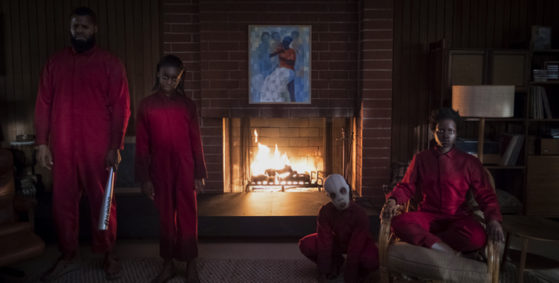 In 1986, young Adelaide Thomas goes on vacation with her parents to Santa Cruz. At the beach, she wanders off & enters a funhouse, where she encounters a doppelgänger of herself in the hall of mirrors. When her parents (Yahya Abdul-Mateen II from Aquaman, Watchmen, & Candyman / Anna Diop from Titans, 24: Legacy, & Bosch) eventually find her, she is unable to speak. In the present day, the adult Adelaide (played by: Lupita Nyong’o from Star Wars franchise, Black Panther, 12 Years a Slave, & Non-Stop) is going to her family’s lake house in Santa Cruz with her husband Gabe Wilson (played by: Winston Duke from Black Panther, Avengers: Infinity War/Endgame, & Person of Interest) plus their two children, Zora (played by: Shahadi Wright Joseph from The Lion King, Hairspray Live!, & Dream Years) & Jason (played by: Evan Alex from Mani, Kidding, & Baby Avengers). 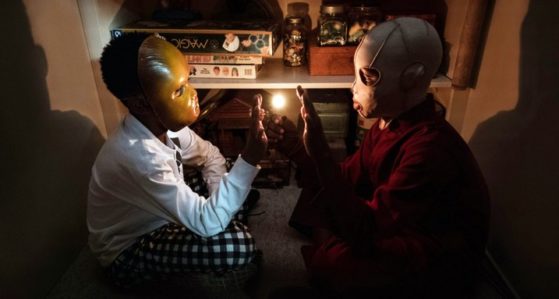 She just wants to stay at their place & enjoy the scenery. Gabe & the kids convince her to go to the same Santa Cruz beach. They meet up with their friends Josh (played by: Tim Heidecker from Fantastic Four, Bridesmaids, Brigsby Bear, & Ant-Man and the Wasp) & Kitty Tyler (played by: Elisabeth Moss from Mad Men, The Handmaid’s Tale, The West Wing, & Girl, Interrupted) plus their daughters (played by: the Sheldon twins from Friends). Jason takes off & it reminds Adelaide of her past incident so she freaks out! Later that night, a random family appears in their driveway & refuses to leave when confronted. They invade the Wilson’s house & when seen closer they look exactly like them. The strange doppelgängers terrorize the family one by one. They are forced to fight for their survival & escape to the Tyler family house for safety. They soon realize they are not the only ones dealing with this deadly problem. Can they make it through this & still be the same people they were once before???? 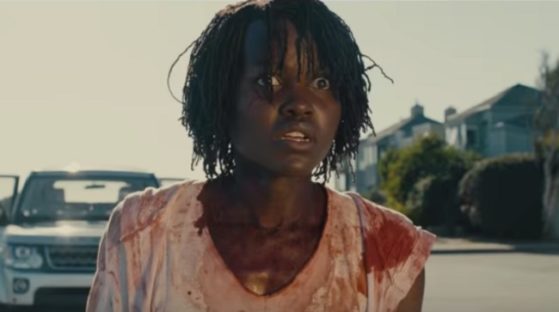 Comedian Jordan Peele took the horror genre by surprise with it’s his directorial debut Get Out. So when US was announced & the whole community went crazy over it. This is a more modern day & darker approach to the classic Invasion of the Body Snatchers story. Get Out was more of a suspense thriller compared to this, Peele made sure to deliver a straight up horror film with US. The small cast here was great especially the leads. They all had to perform duel roles considering the concept & everyone made their other character stand out from the original version. It’s a rare for this genre to have so much award winning talent involved which includes Oscar Winner Jordan Peele, Oscar winner Lupita Nyong’o, & 2 time Golden Globes winner Elisabeth Moss. Lupita Nyong’o stole the show in this, you couldn’t look away from her amazing performances. I loved all the retro moments & placements in this production. The jaws shirt, the VHS tapes, Home Alone, The Goonies, & them referencing that Lost Boys was being filmed there at the time. The score & soundtrack was top notch for US, it was great to hear the Luniz get resurrected back into the mainstream with their hit “I got 5 on It” plus the later remix used in the movie. The “Fuck the Police” scene was hilarious & it had a few other comical scenes that really worked but for the most part it had lots of unintentional humor that weren’t supposed to achieve that reaction but it ended up funny in a real bad way. It had so much potential, this feature felt a little rushed at times & it didn’t come near Get Out but it still had it’s moments. I will say, this is the type of film that you need to watch more than once to appreciate it. I seen it in theaters on opening day & I definitely enjoyed it more on this revisit. I am happy that the horror genre can still turn out box office numbers like this & get the attention of a wider audience but I hope Peele takes his time on his next darker project because this should have been better. RECOMMENDED!!!! 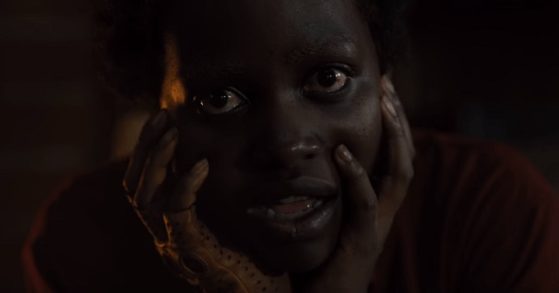 Let’s talk about the high definition presentation from Universal! This 1080p (2.39:1) transfer looks stunning on blu ray, I can only imagine what the 4K looks like. It was really cool to see Santa Cruz used for another horror film, the visuals were great for it. The stylized cinematography made all the locations stand out. All the characters had a unique look to them. It has 4 different audio options which includes English: Dolby Atmos, English: Dolby TrueHD 7.1, French: Dolby Digital Plus 7.1, & Spanish: Dolby Digital Plus 7.1 on the release. It feels like I am at the theaters again for this! The dialgoue is crystal clear. All the madness is elevated & the music sounds amazing on these tracks. It also includes English SDH, French, & Spanish subtitles. Both picture & sound are very impressive, this is a great technical release!!!!