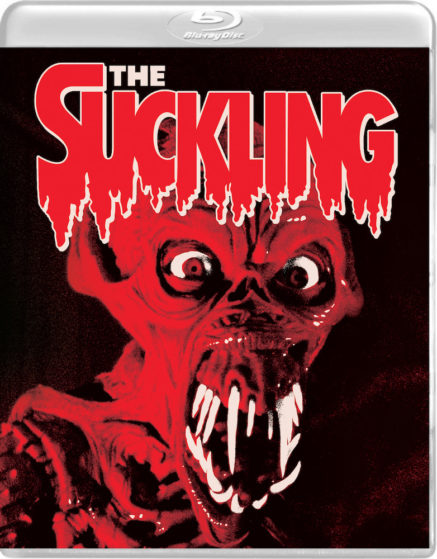 The Suckling (aKa Sewage Baby) is a 1990 horror movie written & directed by Francis Teri (Flesh-Eating Mothers & Head Games). It took Teri a year & a half to raise the money to make this feature. It was released in the 90s on VHS by York Entertainment. It was released on DVD by Elite Entertainment in 2005 & Around the World in 2016. This is the U.S. blu ray debut (unless you count that 2016 bootleg from Mr. Fat-W Video) for the barely seen low budget monster flick from Vinegar Syndrome! A confused & pregnant Girl (played by: Lisa Petruno from Galactic Gigolo, Troma’s War, & Angel of Passion) decides to go to the sleazy abortion clinic that also operates as a brothel in a questionable neighborhood just to look at her options. Her boyfriend Billy (played by: Tim Martin Crouse from Lethal Justice, The Orchard, & Redemption) already had different plans, the girl gets drugged & he pays owner Big Mama (played by: Janet Sovey from Behind the Burly Q, The Orchard, & Redemption) to take care of his problem right away. 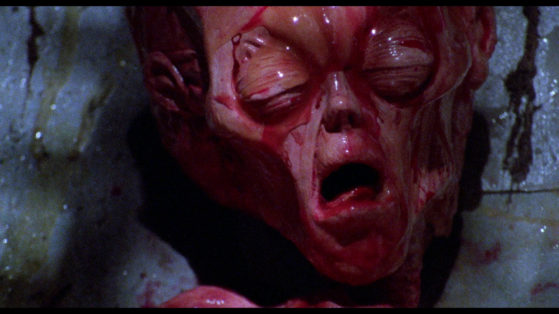 They flush the unwanted baby down the toilet after the procedure. The young couple ends up at the wrong place at the wrong time because prostitute Tammy ends up killing one of her clients while they are still there. Bouncer Sherman (played by: Gerald Preger), Sheryl (played by: Susan Brodsky from I Was On Mars), & Big Mama’s son Axel (played by: Frank Rivera from Project Eliminator, Final Impact, Recoil, & High Voltage) try to get rid of the evidence but now they have two witnesses to the crime so they have to make sure they never leave the house now. Before they can carry out their plan the rejected baby (played by: Fangoria’s Michael Gingold from Troma’s War, The Toxic Avenger Part II/III, Sins of the Father, & Grindsploitation) comes back mutated & bigger than ever looking for revenge. All hell breaks loose between the monster, the criminals, & the couple with the worst luck ever!!!! 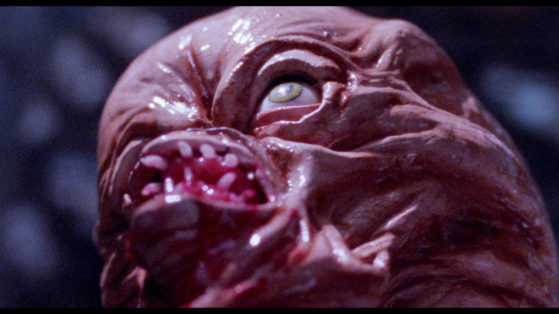 The Suckling is a little known horror feature from the early 90s. Most of you have probably never heard of it before. One of the things that really stand out from this is the sleazy environment. The main location is filthy & one of the last spots you would ever want to be. For this type of film, it takes you in the right direction from the beginning. It’s full of unlikable characters so that makes it easier to enjoy when all the chaos kicks in. The special fx from Ralph Cordero (The Toxic Avenger, Splatter University, Flesh-Eating Mothers, Combat Shock, & Robot Holocaust) are the true highlights from this cheap production! It feels like an 80s flick especially with the gore & the awesome death scenes. Horror fans will be satisfied with all the carnage & ridiculous moments from this monster movie. Don’t expect any Oscar caliber performances here but you will experience some Razzie worthy ones. The Suckling makes up for it with pure entertainment & lots of fun over the top moments. It has a Frank Henenlotter vibe to it which is a good quality when it comes to the horror genre. Plus it kinda resembles an early Troma production which is always cool. I think it’s very under-rated, HIGHLY RECOMMENDED!!!! 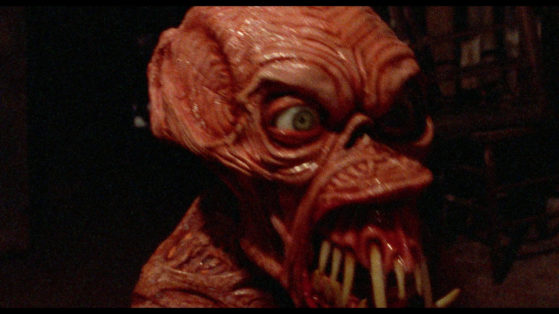 Let’s talk about the high definition presentation from Vinegar Syndrome! This 1080p (1.85:1) transfer scanned & restored from the original 16mm camera negative has never looked better on home video! I own the 2016 blu ray release from 88 Films & this version puts it to shame, it’s a huge upgrade to that plus all the previous DVDs. It’s still a no budget flick so don’t expect reference quality but it’s definitely the definitive release for The Suckling. The English: DTS-HD Master Audio 2.0 track is a major improvement over all the other home video releases. I love the score for this & it sounds great here. It also has English SDH subtitles.

Let’s discuss the special features from Vinegar Syndrome. “Teenage Mutant Ninja Fetus” is a little over 13 minute with Fangoria’s Michael Gingold. He played the mature version of The Suckling in this film. He talks a little about what he’s known for. He chats about his experience on the feature & how he got the role for it. He says he hanged out with the FX artists because they were always the most fun on the set. He tells a funny story where the production had a few epic fails while filming. He shows off a rare promotional item from the film. He brings up it’s small theatrical run then hitting VHS & DVD later on. He mentions it was cool to write about it in the magazine since he had a part in it. He talks about being a little embarrassed by it back in the day but now he’s happy to be in it’s history & looking forward to this new restoration. He brings up other films that he’s in been in. He jokes he doesn’t know why all his film maker friends always want to kill him in their movies. A little over 12 minute “Interview with writer & director Francis Teri. He says it was very hard putting together & making this film. He mentions the fx artist made a deal for himself to only be on the set for a few hours & to keep everything that he made. He talks about the monster & other special fx costing around $8,000 to $10,000 out of the $50,000 budget for this. He thinks the overall film could have been better but it prepared him for the business world. He chats about him considering doing other features but never had the motivation to pursue them. He brings up the promotional giveaway item for The Suckling & how it was manufactured. A little over 2 minute “Image Gallery” featuring a variety of photos from the production including behind the scenes, script, & promotional pics. It also includes a DVD copy of the release & reversible artwork. It’s available everywhere right now including the Vinegar Syndrome store which features a limited edition slipcover version, CHECK IT OUT!!!!