Mausoleum is a 1983 horror film directed by Michael Dugan (Super Seal, Raging Hormones, & The Adventures of Turkey Dude). It was given a limited theatrical release by Motion Picture Marketing (MPM) in 1983. It won the Special Jury Prize at the 13th Paris Film Festival of Sci-Fi & Fantasy Films. It was originally put out on home video from Embassy Home Entertainment on VHS. Years later, it was released by BCI Entertainment on DVD for their Exploitation Cinema double feature line with Blood Song. Ten year old Susan Walker attends her mother’s funeral with her aunt Cora (played by: Laura Hippe from The Swinging Barmaids, Stay Hungry, & Logan’s Run). After the funeral, Susan flees into the family’s mausoleum tomb & witnesses a demonic supernatural force that kills a vagrant in the cemetery. The encounter results in Susan falling under the influence of an ancestral demon connected to her family lineage. Twenty years later, Cora worries about Susan (played by: Bobbie Bresee from Ghoulies, Evil Spawn, Surf Nazis Must Die, & Star Slammer) on the anniversary of her mother’s death. She is married to Oliver (played by: Marjoe Gortner from Earthquake, Acapulco Gold, Starcrash, & Hellhole), he is always busy with his job. 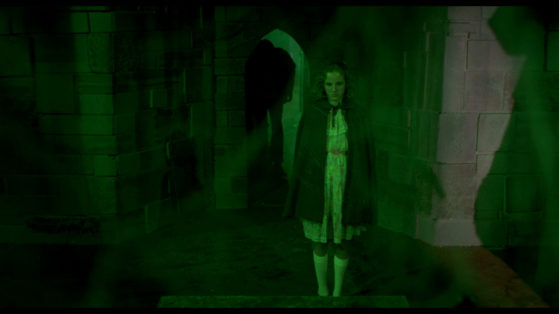 They go out & enjoy the night. She is harassed by a man at the club. He ends up trapped in his car & burning inside of it. Oliver is forced to leave town for some work business which leaves Susan all alone. She isn’t feeling like herself, she seduces her landscaper Ben (played by: Maurice Sherbanee from The Don Is Dead, Indecent Proposal, In the Army Now, & The Pursuit of Happyness). It ends being a huge mistake. Cora brings Susan paperwork pertaining to the familial inheritance & she sees a different side of her. Maid Elsie (played by: LaWanda Page from Sanford and Son, Friday, CB4, & Don’t Be a Menace to South Central While Drinking Your Juice in the Hood) is unlucky & catches her boss on a bad day. Oliver notices all of their help isn’t showing up for work anymore & asks his wife what’s going on with that? She gives various excuses & acts like nothing is going on. Dr. Andrews (played by: Norman Burton from Simon King of the Witches, Diamonds Are Forever, Fade to Black, & Bloodsport) & Dr. Logan (played by: Sheri Mann) try to help the troubled woman as she is being taken over by an evil entity. They find out about her family’s past & reveal that the Nomed family is cursed. Susan is becoming worse & more dangerous as time goes on. Can they stop the demon inside her? or Will she kill everything & everyone that comes near her???? 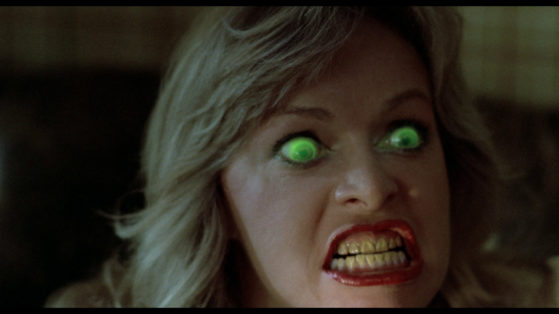 Mausoleum is full of entertainment & it has some colorful cinematography. It provides a nice atmosphere, the setting definitely catches your attention. When it comes to crazy women in cinema, Bobbie Bresee as Susan is very re-memorable. She completely loses her mind here & doesn’t hold back when it comes to violence. She also isn’t shy about showing her body either. The former playboy bunny is easy on the eyes & gives a brave performance. The rest of the supporting were real solid & helped elevate the overall production. Special effects master John Carl Buechler (A Nightmare on Elm Street franchise, Halloween franchise, Friday the 13th Part VII: The New Blood, From Beyond, & Bride of Re-Animator) delivers some amazing 80s gore & demons in this. It’s the true highlight in Mausoleum, it had some gruesome kills & demonic Susan looked really creepy! Any horror fan will be pleased with the end result for this. It gives you everything that you would want for this type of film especially fans of the 80s. There’s never a dull moment with the feature, it has a good pace to it & it’s fun to watch especially with some friends. Turn off your brain for a little bit & just enjoy it. It’s been hard to find for years so not as many people know about it but it’s very under-rated. Thanks to the great folks at Vinegar Syndrome, it’s been resurrected to home video & now available to the public again. HIGHLY RECOMMENDED!!!! 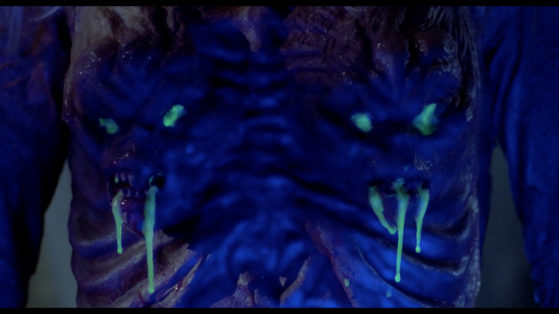 Let’s talk about the high definition presentation from Vinegar Syndrome! This 1080p (1.85:1) transfer was newly scanned & restored in 4K from it’s 35mm original camera negative. This is one of the biggest upgrades ever when it comes to home video. It completely blows away the damaged & edited BCI Entertainment DVD from years ago! It’s never looked this good anywhere, I am beyond impressed with Vinegar Syndrome’s restoration work. They bring these small films back to life & it’s like watching them for the very first time. The English: DTS-HD Master Audio Mono track is also a major improvement compared to all the other previous releases. It sounds great in my home system. The dialogue is very clean, all the madness is elevated, & the music sounds crisp. The score added the perfect vibe to this, I always enjoyed it. It has English SDH subtitles. The quality for both picture & sound on this new blu ray release is top notch!!!! 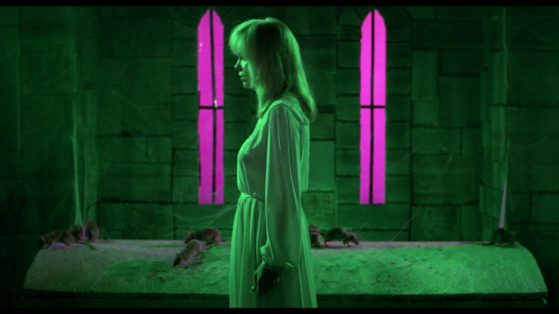 Let’s discuss the special features from Vinegar Syndrome on this disc! “Making Monsters” is an almost 9 minute interview with special effects creator John Carl Buechler. He chats about how he got the gig for this. He talks about drawing the demon right on the spot like a police sketch when the producers described what they wanted for it. He goes into great detail about some of the special effects for the production. He says producer, writer, & cinematographer Robert Barich was the real director for this. Michael Dugan was more concerned with the visual style for it. He mentions he was working on Roger Corman’s Forbidden World at the same time so he had some friends help him finish this.It has variety of promotional material which includes a “Trailer”, 2 “TV Spots”, & a 2 minute “Still Gallery”. It has reversible artwork & a DVD copy of the release with it. It was originally a Black Friday exclusive with a limited slip cover, that sold out really quick but it’s now available everywhere with this brand new standard release from Vinegar Syndrome. This needs to be in your collection ASAP, check it out!!!! 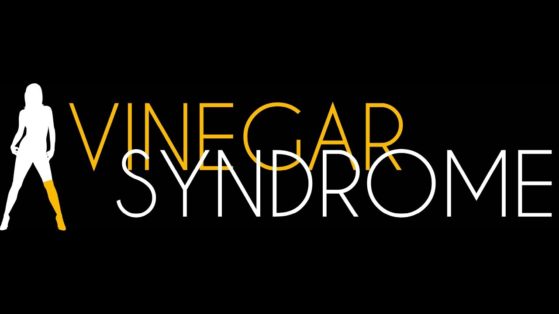