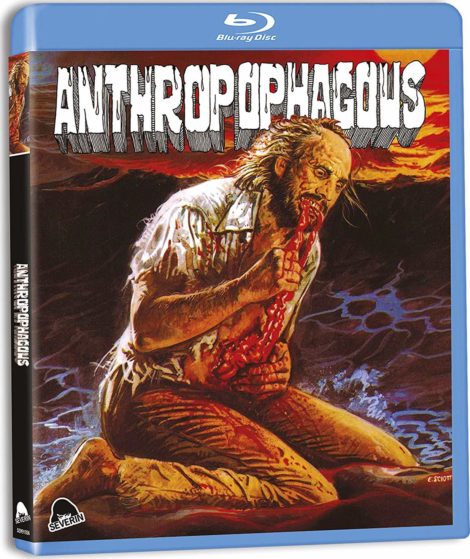 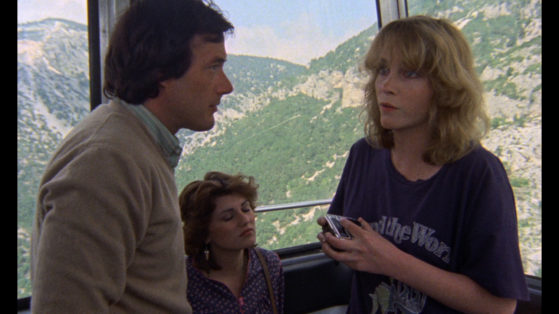 A pair of Germans visiting a remote Greek island go to the beach & they are murdered by an unknown monster. At the same time, tourists Maggie (played by: Serena Grandi from Delirium, The Adventures of Hercules, Miranda, & The Great Beauty), Daniel (played by: Mark Bodin from Alien 2: On Earth, Delitto di stato, La nouvelle malle des Indes, & La Cage aux Folles II), Andy (played by: Saverio Vallone from Crazy Navy, The Dark Side of Love, & Delitti), Arnold (played by: Bob Larson from Fist of Glory, Raiders of the Sun, Kill Zone, & Angelfist), & Carol (played by: Zora Kerova from Cannibal Ferox, The New York Ripper, Touch of Death, & Warriors of the Wasteland) are about to take a trip to the islands. On the way there they pick up Julie (played by: Tisa Farrow from Zombie, The Last Hunter, Strange Shadows in an Empty Room, & Fingers). 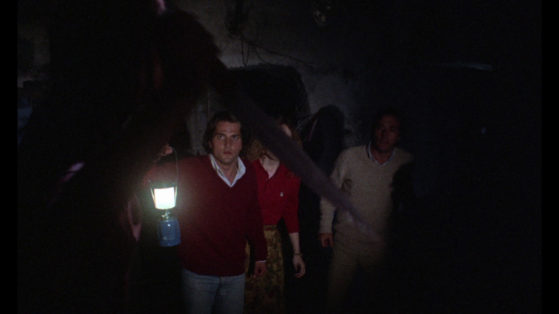 Maggie gets hurt so they stop off to a small island. The unknown monster strikes again when some stay behind on the boat. They find a house so they there for help. They discover a blind woman named Henriette (played by: Margaret Mazzantini from The Voice) there. They find out that it belongs to a man named Klaus Wortmann (played by: George Eastman from Absurd, The Barbarians, Hands of Steel, Warriors of the Wasteland, & Ironmaster). A woman in black named Ruth (played by: Rubina Rey from Càlamo) tries to warn them to go away. The unknown monster is identified as Klaus Wortmann, he starts to hunt down his unwanted guests. The friends fight to survive against this unstoppable killing machine, who will make it out alive from this living nightmare???? 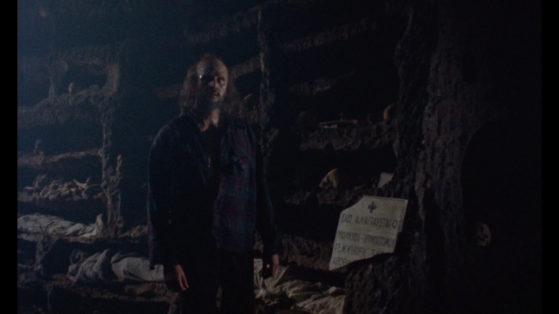 Antropophagus has a notorious reputation of being one of the goriest films ever made. It does have two extremely brutal moments that are very re-memorable when it comes to splatter. The kills & special effects are very impressive when the film actually picks up it’s pace! Speaking of that, it’s one thing about this feature that seems to be rarely brought up. It’s really slow, not much happens for a long time here & the main villain played by George Eastman shows up late in the production. I wish his character had more screen time in this because the backstory was interesting & I loved the look of Klaus Wortmann. They kept him a mystery for more than the first half in this so you have to be patient with this film. It actually rewards you for sitting through lots of drama & character development before it gets crazy. You will recognize some of the cast such as Serena Grandi, Zora Kerova, & Tisa Farrow from other genre flicks. Joe D’Amato liked to save money & pumped out as much low budget material he could so he usually didn’t care about the acting in his productions but this is one of the higher quality ones from him. I’ve always enjoyed Antropophagus, it’s a nice hybrid of the slasher & cannibal sub genres but I will say don’t expect it to be non stop entertainment or thrills because it’s definitely takes it’s time to deliver. Severin Films gives this video nasty it’s first blu ray release in the states with it’s semi follow up Absurd in their fully uncut gory glory! HIGHLY RECOMMENDED!!!! 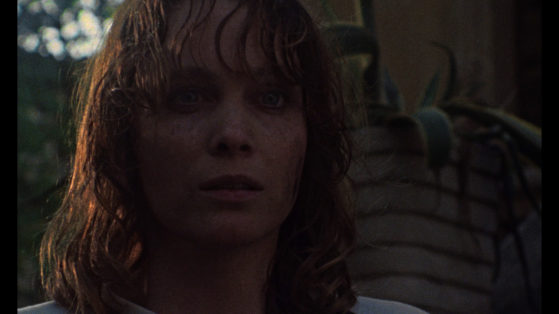 Let’s talk about the high definition presentation from Severin Films! Let’s be honest, Antropophagus has never looked that great or has been considered the highest quality production but this 1080p (1.85:1) transfer from a new 2K scan from the original 16mm negative blows away both 88 films blu ray releases plus it’s a huge upgrade from the previous Shriek Show DVD released in the states! It has two different audio options which include English: DTS-HD Master Audio 2.0 & Italian: DTS-HD Master Audio 2.0 on the disc. It’s a major improvement from all the other home video releases. The dialogue is clean & all the chaotic moments are elevated but the true highlight is the score from Marcello Giombini (Panic, Emmanuelle franchise, Enter the Devil, & Battle of the Stars)! It sounds great & it has a nice boost to it. It also has English & English SDH subtitles. 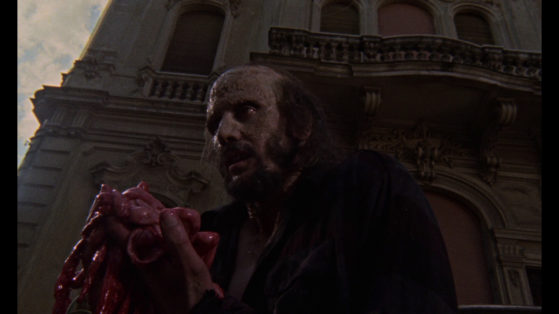 Let’s discuss the special features on this blu ray disc! “Don’t Fear The Man-Eater” is a little over 13 minute interview with co-writer, producer, & actor George Eastman. He chats about how he met Joe D’Amato. He talks about his experience on this production including the grueling time in the makeup chair for his role. He goes into detail about the special effects & some of the more gruesome moments, He mentions he re-wrote the original script & brings up the cast. He said Tisa Farrow did the feature because she was dating D’Amato’s brother at the time. “The Man Who Killed The Anthropophagus” is an almost 14 minute interview with actor Saverio Vallone. He chats about how he got into acting. He talks about working with director Joe D’Amato. He brings up the cast & mentions his experience with them. He says he wasn’t familiar with horror before doing this. “Cannibal Frenzy” is an almost 6 minute interview with special effects artist Pietro Tenoglio.  He chats about working with director Joe D’Amato. He says he did over 40 projects with him. He goes into details about some special effects. He jokes that D’Amato once told him that he was famous in America for this type of film.

“Brother and Sister in Editing” is an almost 13 minute interview with Bruno Micheli. He chats about his family being in the movie business, both his father & sister worked on films. He tells a funny story on how he got fired from a job that made him become an editor. He talks about working with his sister on most of his editing. He says Joe D’Amato & most of his block growing up made movies or worked in the industry somehow. He brings up that his sister had no interest in editing D’Amato hardcore material so he had to do it by himself at night. He mentions working with Fulci & how his experience in the editing room was with him plus D’Amato. He talks about his falling out with the late director. “Inside Zora’s Mouth” is a 10 minute  interview with actress Zora Kerova. She talks about being in a comedy theater group. She says did modeling when she was in Italy & that’s how she got discovered as an actress. She chats about working with the director & she seems very surprised that he did hardcore films. She mentions instantly connecting with Tisa Farrow. She says the fake eye rumor is false about her. She talks about the rest of the cast including Serena Grandi, Margaret Mazzantini, Saverio Vallone, & George Eastman. She brings up that Eastman never enjoyed acting & always preferred writing. It has 3 different “Trailers” for the film. It also has reversible artwork. It’s available everywhere right now, CHECK IT OUT!!!!