Masters of Disguise! – The Art of Cosplay

With it being Monster Mania weekend, the horror community takes this time to get a bit creative. I can tell you first hand, there were a lot of cos-players who had some awesome costumes. Some more detailed than others but all very unique in their own way. I chose this topic to talk about because I have an interest in getting involved with cosplay. I loved dressing up as a kid and going trick or treating with my brothers. As a young teen, I’d cut my old blankets and/or clothes and make “new” outfits out of them. I have an idea of what I’d want my first cosplay character to be, but I’d also like to hear some suggestions. I’m up for anything. The hard part for me is the makeup. I’d probably have no problem with the outfit/costumes, but if it isn’t a casual makeup application, I’m all discombobulated.

We had a ton of Pennywise and Georgie cos-players due to the fact that Tim Curry was one of Monster Mania’s guests, along with 5 of the kids from 2017’s ‘It’. I saw many different versions of the original Pennywise and the new Pennywise. There were also many cute versions of Georgie (you know, before he was eaten). My favorite costume out of the multiple Pennywise’s was the one down below….

This costume was one of the most detailed and I think about the only one I saw that closely stuck to the film the most. Although, many of the other Pennywise’s I saw were noticeably women cos-players, toddlers, and teens. The one above I assume was a man. But you can never be sure. I’ve seen some pretty sick Halloween makeup tutorials done by women creating intense and scary horror looks. Anyway, here are some of the other Pennywise’s that were seen at this years Monster Mania… 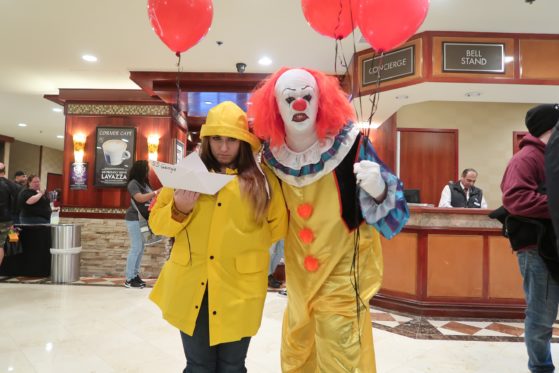 Since 6 out of 9 Jason’s was at this con, EVERYONE had to be Jason. I’ve never seen so many Jason’s in one place. Men, women, and children were dressed as Jason. I have to admit, it was pretty cool seeing a female Jason. I even saw a little baby Jason. He was so cute!! The Jason I saw the most of was Part 3 Jason I believe. Then again, I think it was the same way last year as well. 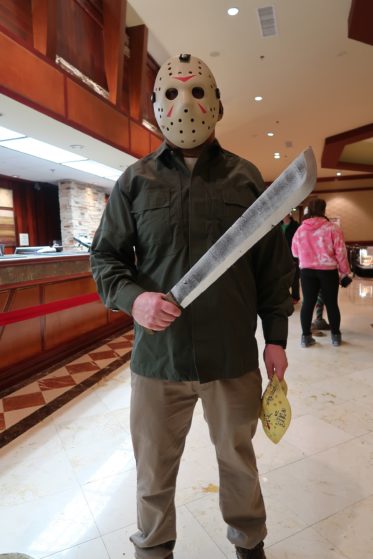 We ran into this one guy who was dressed as the man on the cover of ‘The Thing’ due to John Carpenter being the con’s headliner. He was pretty cool. I think Chris was bumped by tank on his back. 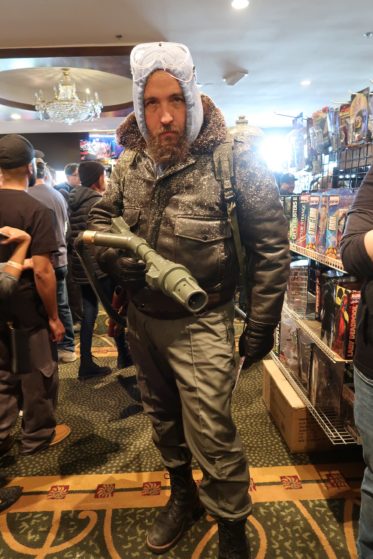 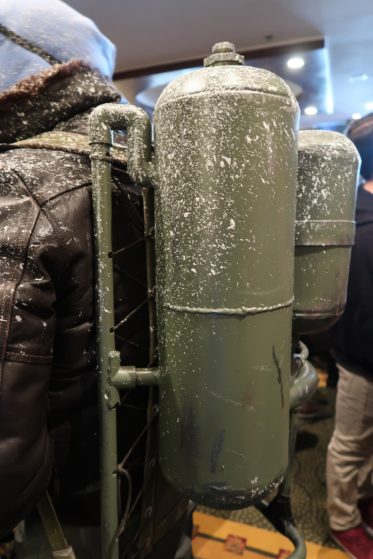 This dude here! I thought this was the most creative costume I’ve seen. I think it was the same guy we saw last year dress fully as Deadpool. If not, whoever you are, you are awesome! DEAD WISE? PENNY POOL? DEAD PENNY? I don’t know. Whatever your name is, keep doing what you’re doing!

The zombies have risen for this special occasion for Tony Todd was a guest. If you dont know, he starred in Tom Savini’s Night of the Living Dead. Shout out to the ONLY zombie I saw. If there were others, they were hiding.

Michael Myers also made an appearance… multiple appearances. Obviously because of Carpenter. He was creeping through the crowd and being, you know, creepy. 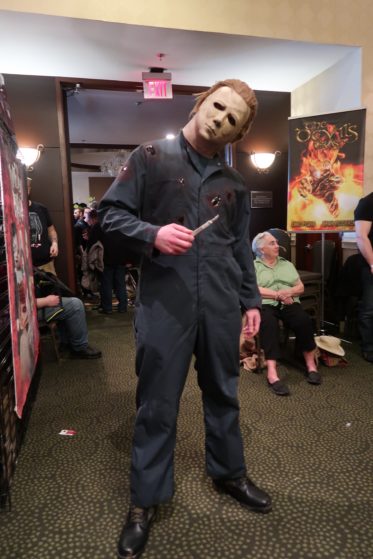 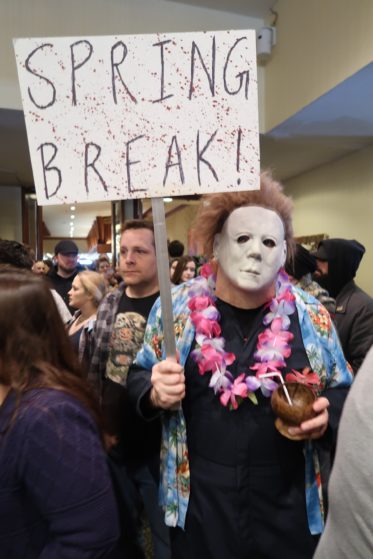 Freddy Kruger, Lydia, Edward(a) Scissorhands, the twins from The Shining, and much more was seen. Either the cos-players didn’t want a photo taken or we just didn’t get around to catching them in the tight conditions we were in. I also saw some costumes that just went with the horror vibe. Vampires, werewolves, etc… The original gang of monsters, I call them. 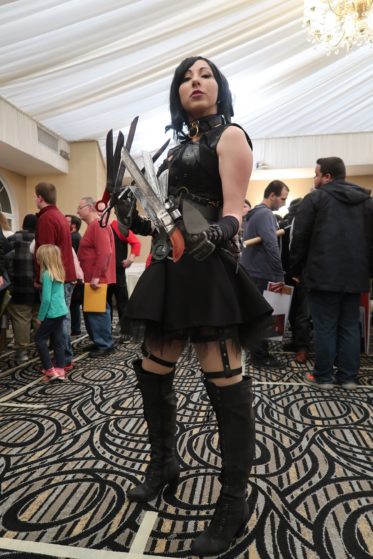 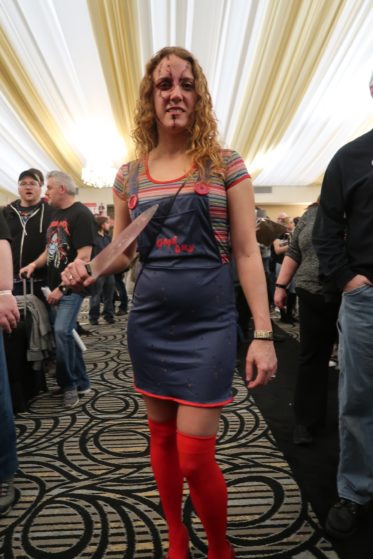 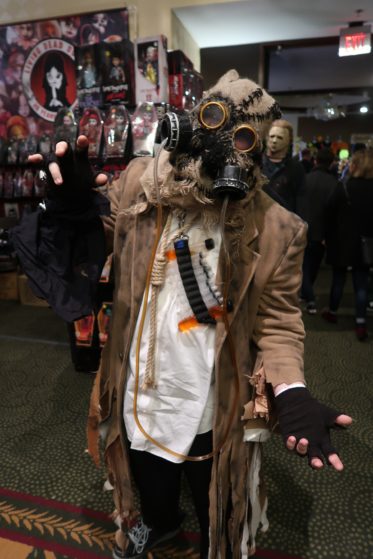 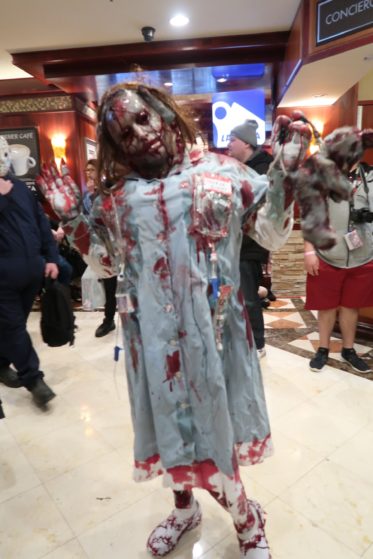 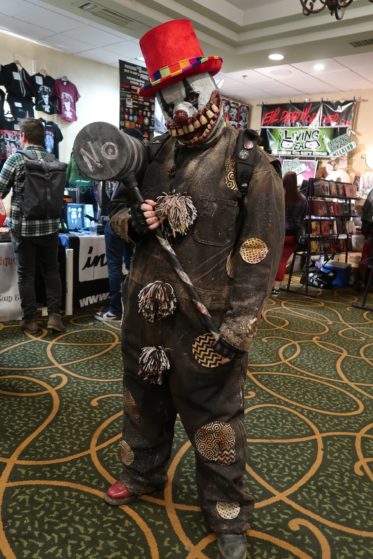 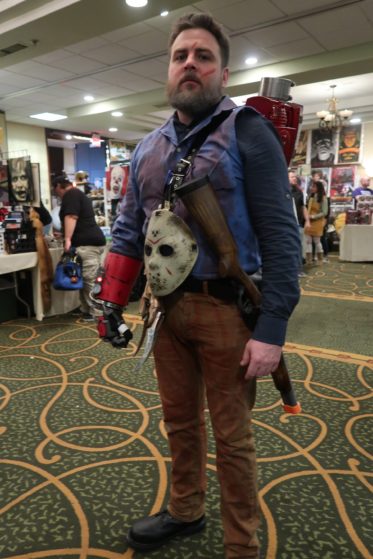 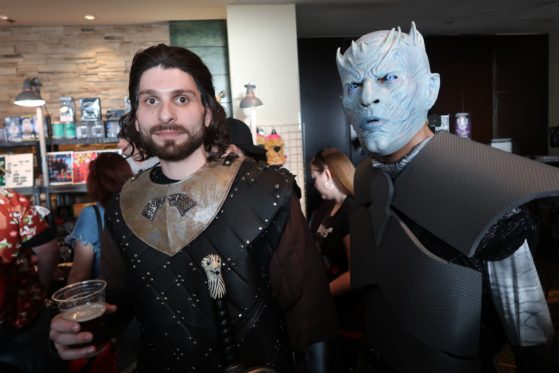 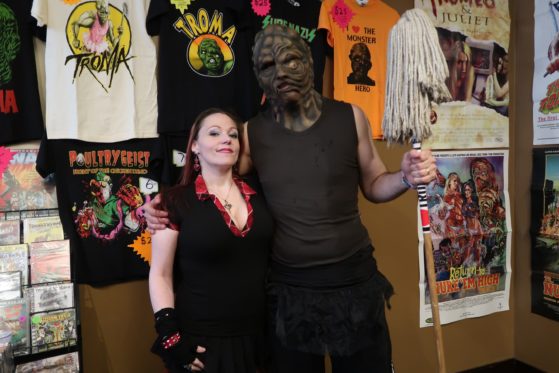 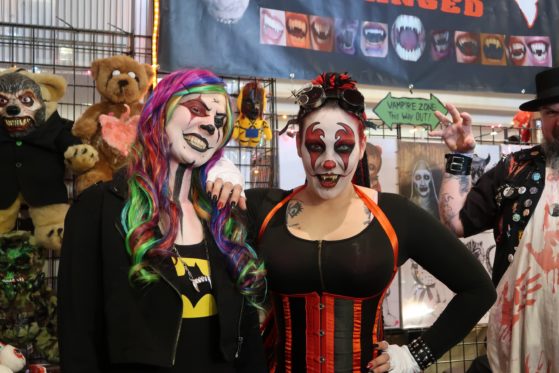 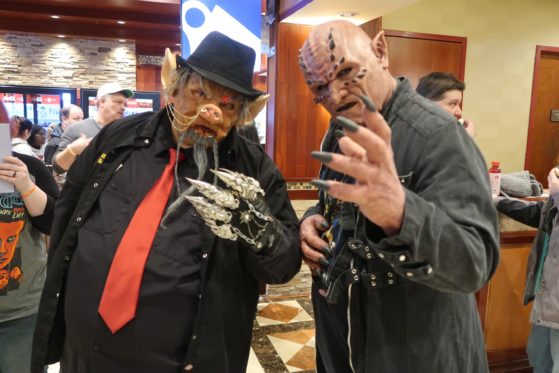 Thanks to all the cos-players who allowed Chris to take photos and thanks to Chris for taking time to taking the photos. Every costume was amazing. We have no idea who you are, but if you see this, feel free to reach out. Now, that I have an idea on how I want to do this whole cosplay thing and I see how accomplishing it can feel to put time into this hobby and to be able to wear your creation when you’re finished. I am ready to take on the challenge.