“Be My Victim!” – Meeting Candyman Himself

First of all, being in the same room with Tony Todd was a dream come true! I never thought I’d see myself actually meeting him in person. I’ve talked about it all the time with James, but that was before I knew he was coming to New Jersey for Monster Mania. I went crazy when James told me!

The very 1st Tony Todd movie I saw was ‘Candyman’. I was only 13 years old, my mom was flipping through channels and Candyman was playing on the SCI-FI channel (that’s how it was spelled at the time), and I started watching it. Then my mom told me he was real and takes little kids who were bad. Of course, I believed it. Ever since, I’ve been terrified of him. But obviously, as I got older, Candyman didn’t scare me so much. At least not until Candyman was actually standing right beside me..

So we’re standing in line, and we’re about 3-5 people away from the table, and I’m getting super anxious. I see Tony Todd as he gets up to take a photo with Steve Dash (Jason from ‘Friday The 13th Part 2’). **Side Note: That red head dude to the right of James was Tony Todd’s assistant. He reminded me of Seth Green’s character, Richie, from the original ‘It’ movie. #SorryNotSorry** 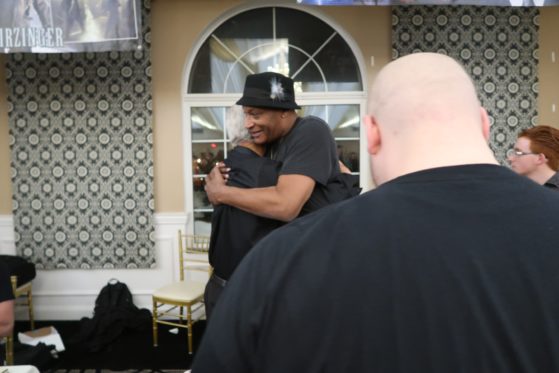 My 1st thought: Nothing. I’m too busy secretly screaming with excitement on the inside. I couldn’t believe how close we were. Maybe 5 minutes later, it’s our turn. James pulls out his Night of the Living Dead DVD to be signed, and as he’s talking to Mr. Todd, my stomach’s doing some weird little happy dance which in fact made me nauseous. When it comes time for the photo, James asks if I wanted to jump in with them. I wanted to say no because I was so nervous, but I obviously said yes, which was the best decision of my life. As I’m standing beside Tony frickin’ Todd, Candyman himself, I started shaking. James had the nerve to tell Tony Todd that I was, in fact, scared of Candyman. WHY WOULD YOU DO THAT?! Next thing I know, he looks at me with a straight face, in his Candyman voice, and asked me my name and where I was from. I was able to tell him my name, but when I couldn’t tell him where I was from, he said “It doesn’t matter. Candyman can find you anywhere and he’s coming!” That’s when I froze. I couldn’t stop laughing, I was shaking really bad, and I was hating James so much for that.

But after that, I was able to calm myself down and finally get this photo. 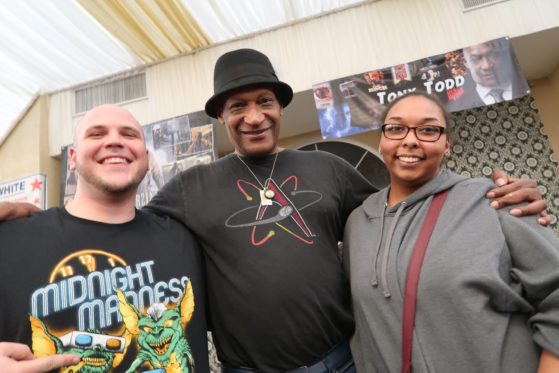 I just want to give an official shoutout to Tony Todd for making my 1st actual celebrity interaction amazing. I mean, I’ve interacted with the other celebrities as well, but Tony Todd was the 1st celeb I’ve ever gotten a photo with. I was always too nervous. So, thank you for pulling me out of my shell and also showing me that Candyman is absolutely scarier in real life.

One thought on ““Be My Victim!” – Meeting Candyman Himself”