Enter The Murder Triangle! The Meeting of 3 Jasons at Monster-Mania 39

As we began to delve into the first day of the con we wanted to try and focus on knocking out as many signatures as we could. We entered the first main signing room quite early and began the adventure. First up out of the three different Jason Voorhees actors I met was Ken Kirzinger. Ken is known for his role as Jason Voorhees in Freddy VS. Jason, the pivotal film that contested two of the biggest icons of our beloved genre. He was also in Watchmen, Cabin in The Woods and Joy Ride 2 as well. The line was not crazy, crazy long and the price was fair. $30 netted me a signature and a photo with the man himself. I gave him my F13 blu ray box set to sign. I flipped it to the FVJ slot in the box set book and let him sign it up with a nifty chrome paint marker. (Yes, he misspelled my name with a “C” haha! I don’t think I specified with a “K” so that’s my fault.) You can check out our pics below and the pic of his auto on my box set. 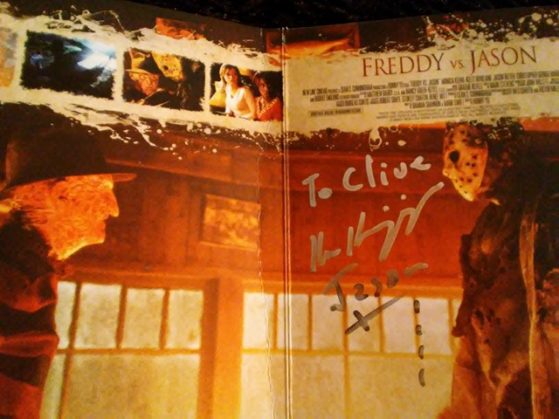 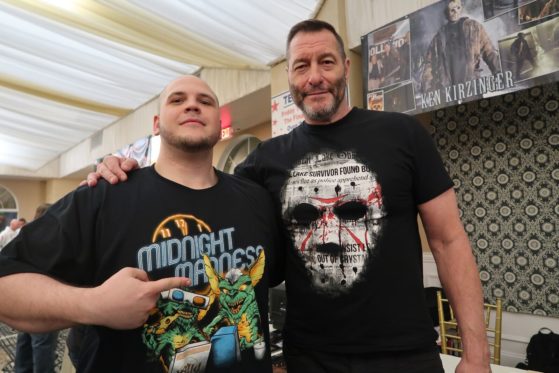 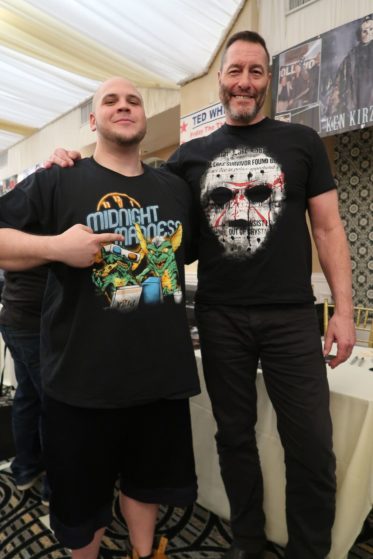 After that we visited, Ted White, the legendary John Wayne stunt double AND Friday The 13th Part 4’s Jason Voorhees as well. The man is 92 years old and STILL getting out to cons, that alone warrants a tip of the hat. I was a bit nervous going up to his line, which to be fair was also not a crazy long wait. As I got to the front of the line and prepared for my opportunity to get my F13 set signed yet again, I spoke to the manager at his table. She sadly informed me he was not taking anymore photos for the day, as I think he was not feeling well, totally understandable. So, I gave him the chrome paint marker and let him sign away instead of doing the photo. The price was $40 for his signature and would of been $10 more for a photo. But well worth it in the long run, as this was one the last Jason autos I needed for this box set and Ted is truly a legend. You can check out the signature below. 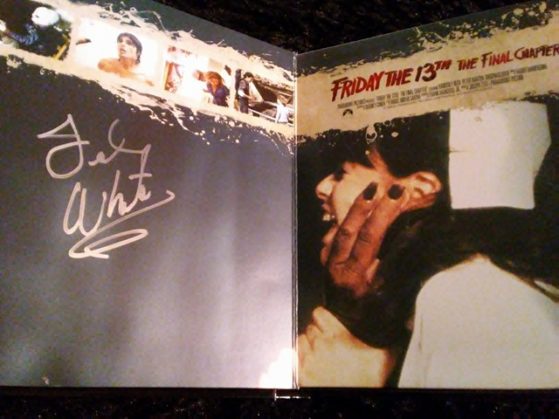 Finally, I was planning to see C.J. Graham next for the last signature of the day on my box set. However, we could NOT find him to save our lives haha. We checked three different signing rooms with no sign of C.J. Finally, near the end of the day we spot him heading into the restaurant at the telly. This at LEAST let us know he was in the building. When Saturday rolled around we made it a mission to find C.J. This was not just for the autograph either, we had spoke to C.J. prior and planned on setting an interview up with him at the event. Sadly, things were a bit too busy and we had to push it back to a different time/date. We are still ironing those details out but rest assured, we will be interviewing C.J. very soon. Back to the details though, C.J. had a pretty short line as well but it took a little bit longer to get to the front. He DOES spend time with each fan and that to me means a lot! The price was $30 for a signature and photo together. I decided to get both and wrap up nearly all the signatures finally for my box set (I still need Ari!!). I gave C.J. the paint marker and let him go to town. Afterwards, we briefly exchanged emails to ensure we can lock the interview in I shook his hand and ended the F13 journey. 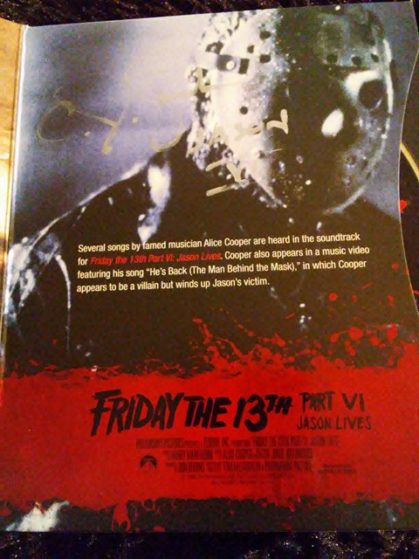 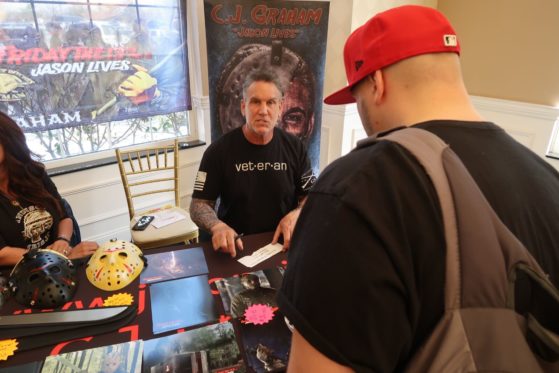 It was really a blast meeting these three gentlemen. All three of them were very kind and polite. C.J. especially made sure to chat it up some and thank us for coming to his table. There were also three other Jason’s in attendance: Kane Hodder, Tom Morga and Steve Dash. Thankfully, I had met all three of them prior at the previous convention and got them to sign my box set as well. Unfortunately due to their passing I will never be able to get Richard Brooker or Betsy Palmer. I will however continue my quest to get signatures from others involved on it as well. Time will tell who will be the next auto. Hopefully you guys and gals enjoyed reading through this experience almost as much as I enjoyed living it! Tell us about your experience meeting a Jason Voorhees actor at a convention below in the comments!