Slasher Fan Gets Slashed At Monster-Mania 39

As MM39 came to a close yesterday, fans and attendees of the convention have taken to the internet to voice their opinions (and often, their discontentment) with the outcomes of this latest event and management issues that came along with the massive crowds. We’ll reserve our opinions on these issues, perhaps for articles later this week, but this Monday morning we’ve spent a great deal of time going through these posts, Facebook comments, YouTube vlogs, etc, and some more information regarding this incident with Kane Hodder from Friday’s opening night have come to light so we thought it only right to amend our story.

Please note we’re largely working with hearsay from other show-goers here, but this is what we know, until Kane or the convention management itself issues any sort of statement, please take everything with a grain of salt.

Fellow convention attendee Anthony T. was kind enough to join our growing Horror Headquarters community on Facebook after reading the original article below in order to help shine some light on the incident:

“Yea I was there it was Steve Nappe who was cut with the machete… a fan had brought one in for Kane to sign and apparently it was sharp… it did cut Steve pretty bad though I felt bad for Kane as well because it tore him up. They really shouldn’t let people bring something that sharp in because that place was packed, people were pushing and shoving just to even get through the lobby”

Steve Nappe is a friend of Hodder’s and fellow actor & stuntman in this business, and we can confirm that Nappe WAS indeed present prior to the incident, but not after.

Anthony informs us that his interaction with Hodder as a fan and convention-goer happened post-incident, and that Hodder was very shaken up by what had happened but reported that his friend was doing okay and in the right hands getting medical attention.

As for the fan who brought in the REAL blade for Hodder to sign, we’ve heard a lot of conjecture but nothing finite. In the comments section of a rant and vlog YouTube video posted on 3/11/18 (the Sunday of the show) by channel Genuine Reels Movies & Comedy, several consumers of the show voice their opinions on event management issues from this years event, including a comment by one Scott H, who presents a lengthy set of thoughts and criticisms of the event from a STAFF MEMBER’s perspective, and points out that:

“…the fan flat out lied to him and told him it was a fake prop and not sharp at all. After that you know what happened.”

As a huge fan of these events, I’ve personally always been bewildered by the leniency of this type of thing occuring, I’ve DEFINITELY seen other real weaponry and dangerous articles brought in by fans solely for the purpose of having a celebrity sign them. Now… the horror community is genuinely a rare breed in that 99.9% of the fans and consumers you might meet and one of these events are very likely to be the coolest, nicest person you’ve ever met. Anyone I’ve ever had a conversation with at any of these events HONESTLY feels like a friend, or a family member. So I can understand why these kinds of things would be overlooked with such a genuinely well-behaved group. How ironic is it that a group of nerds that just LOVES to see people mangled to pieces, or chopped to bits, or terrified beyond the natural world, would be friendlier than your average dad at a middle school ballgame?

What does this mean for the bag-checking and front-entrance policies of future shows? We’ll have to just add this to the list of communicative and management issues that have surfaced after this most recent event, and wait and see how MM40 is handled.

We’ll update this thread if any additional info becomes available. See below for the original article and photos posted late Friday night from the show.

Klive, Naya and myself arrived fairly early to an extremely busy opening Friday night of the 39th Monster Mania horror convention around 5:45 this evening. This weekend marks my second Monster Mania, but I’m no stranger to the convention experience, and I think I can safely speak for all three of us when I say – after wandering the first few early hours of the show, this lineup has drawn in quite the crowd (keep your eyes peeled throughout this week for additional articles, interviews, and more content from the show!)

After bouncing up and down in the ticket line for about 45 minutes, trying to forget how much water I’d drank on the drive up (while Klive and Naya strolled right in, being the good pre-ordering horror nerds they are), we quickly made our first rounds and got our bearings. The layout this time around feels very familiar to our last show here in Cherry Hill, so it didn’t take us long to find our way around. Eager to get a head-start on the weekend, we made our way to the signing rooms to get our line-riding out of the way before the REAL big crowds show up tomorrow.

In between signings, I stepped outside to get some air and drop off an armful of horror treasures at the car. Stepping around the side of enormous Crown Plaza Hotel, my eye was immediately caught by the flashing lights of an ambulance… barely 3 hours into the show?

Not thinking too much of it, and not seeing any easy-to-spot clues as to what in the actual hell was going on, I snapped a couple quick shots like any decent nosy event photographer would, finished shivering through my cigarette and shuffled my way back into the madness…

…to immediately be greeted by a very anxious looking Klive with some unfortunate news. While I was out, (according to other fans in the signing room) acclaimed actor, stuntman and producer Kane Hodder was involved in an extremely unlucky and ironic incident with a fan during a meet-and-greet and signing in which, while posing for a photo opportunity with the star using a real machete for dramatic effect, the fan was left severely injured. The fan was reportedly sliced deeply across the forearm, requiring immediate medical attention and leaving a great deal of very real blood in his wake.

Suddenly the ambulances made more sense.

Kane is a huge name in this events lineup and maybe more notably – the horror community, most widely known for his roles as deformed bringers of death Jason Voorhees in Friday the 13th Parts VII & VIII, Jason Goes to Hell, & Jason X, and Victor Crowley in Hatchet I, II, & III.

My eyes shot around the room and landed on Hodder’s booth, which was suddenly vacant aside from a few folks who appeared to be waiting for Kane to return with worried faces. After about 10 minutes, a pair of attendees approached the booth and removed a heavily bloodied tablecloth, bundling it up quickly and tossing it in the garbage can one booth over. After about fifteen minutes, a very shaken and remorseful looking Hodder returned to his booth, regained his spirits with the fans and continued meeting and signing. 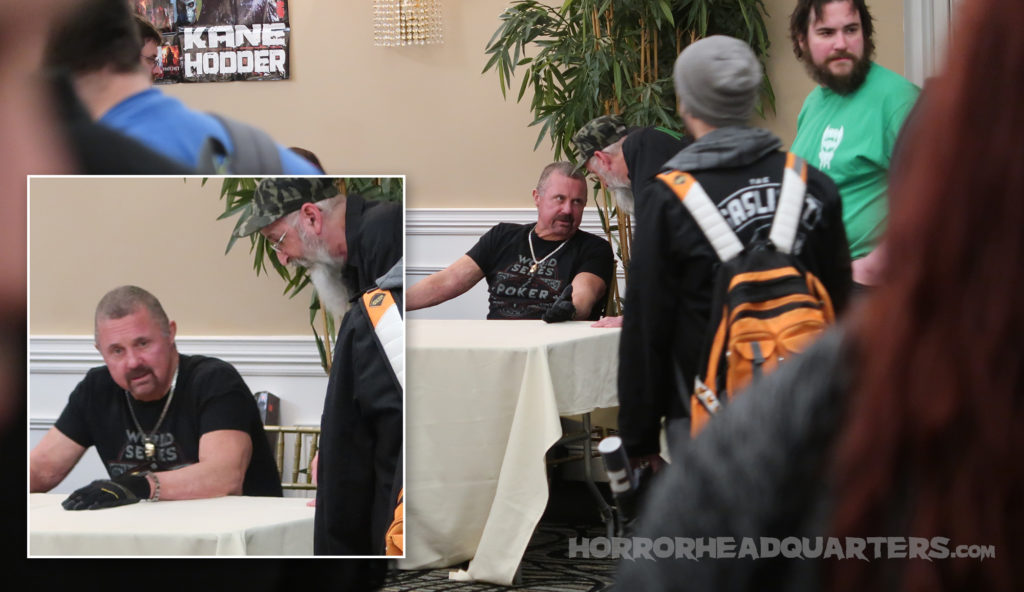 Kane’s face says it all: this incident sounds like nothing more than a very simple but terrifyingly dangerous accident. Something that ironically, could fit right in as a scene from one of the many horror films we’re all here to celebrate.

From what we can tell, the injured fan was rushed immediately to the hospital for treatment, but at this time we have no further information regarding his condition. Our hearts and thoughts go out to him and Kane in regards to this unfortunate accident, and we wish him a quick recovery.

We can only imagine this may or may not have some impact on this venue and Monster Mania as a whole, in particular their policies and protocol in regards to real weaponry in the building.

Nevertheless, the crowd didn’t seem too overly discomforted or disheartened by the incident. Whats that saying… “the show must go on!”

Keep your eyes peeled throughout this week for additional articles, interviews, and more content from the show!