A little history about Arrow Video:

Established in 1991, Arrow Films mostly assisted in distributing Arthouse, World Cinema, Horror, and Classic film to home media and theaters. Arrow would go on to launch Arrow Video, which happened to be a sub-label that focused on Cult Cinema. However, many of their titles they released would have terrible video transfers or lack great special features, this of course wasn’t their fault, but the fault of the licensor. It wasn’t until 2012 that Arrow Films would decide to basically revamp their sub-label by trying to acquire more unique special features and doing the very best video transfers they could afford. Arrow Video’s first major home video title after this revamping was Lucio Fulci’s masterpiece, and pseudo-sequel to George A. Romero’s Dawn of the Dead, Zombie (Zombi 2, Zombie Flesh Eaters).

The big downside to this company was that they were United Kingdom based. Unfortunately, this meant almost, if not all, of their releases were Region B locked. Of course this also meant that people in the United States, Canada, and other countries that were locked to Region A, did not have ease of access to their titles. Many people actually opted to get Region Free Players or Region B players with plug adapters. This proved to be a great, but expensive, method for many collectors to get their hands on Arrow Video’s amazing releases.

Along comes 2014 and Arrow Video had some big news; they were going to launch a US Arrow Video label distributed through MVD! Now fans in the United States, Canada, and other regions didn’t have to buy an expensive Region Free Blu ray player or opt to get a Region B Blu ray player with a plug adapter. The only catch to this big announcement was that the label needed to successfully raise $100,000 from an Indiegogo campaign to actually secure their position with MVD. Needless to say, they effortlessly raised the money and even received $20,000 over the goal. A huge step indeed for such an amazing company.

Despite this, however, Arrow Video still could not release some titles in the Region A territories due to rights issues. One of these very titles was Dario Argento’s Giallo masterpiece, Profondo Rosso, but more widely known as, Deep Red, which received a UK only release in 2016. Now, over 2 years later, Arrow Video secured the rights to release this very amazing film on April 10th in the United States and Canada!

What’s in the package?:

(Assuming the packaging is exactly the same as the UK release) 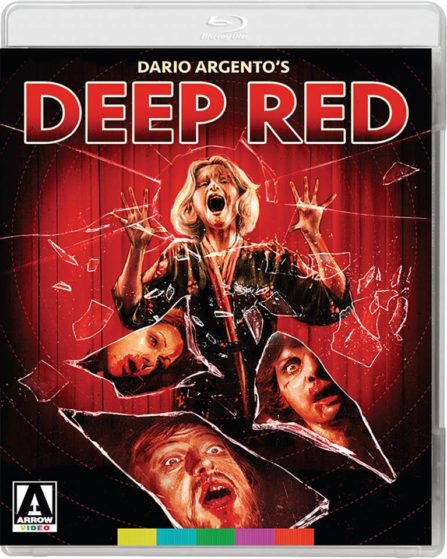 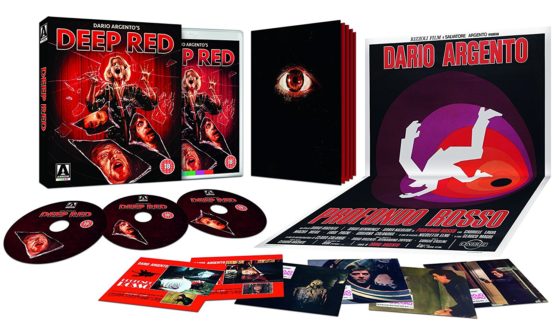 • Brand new restoration from a 4K scan of the original negative
• Audio commentary by filmmaker and Argento expert Thomas Rostock
• Introduction to the film by Claudio Simonetti of Goblin
• Profondo Giallo, a new visual essay by Michael Mackenzie featuring an in-depth appreciation of Deep Red, its themes and its legacy
• Rosso Recollections: Dario Argento’s Deep Genius – the Deep Red director on the creation of a giallo masterpiece
• The Lady in Red: Daria Nicolodi Remembers Profondo Rosso
• Music to Murder For! Claudio Simonetti on Deep Red
• Profondo Rosso: From Celluloid to Shop – a tour of the Profondo Rosso shop in Rome with long time Argento collaborator Luigi Cozzi
• Italian theatrical trailer

* The English audio track on the original, longer cut has some portions of English audio missing. English audio for these sections was either never recorded or has been lost. As such, these sequences are presented with Italian audio, subtitled in English.

This is definitely a great release for collectors who missed out on the UK release, which is highly out of print, or those who don’t have a Region Free/Region B player. It should be no surprise that I highly recommend this film and this release as I own the initial UK release and am a HUGE Giallo and Italian horror fan. For those that have never seen the film, I implore you to check it out; and this release is definitely the best way to check it out!