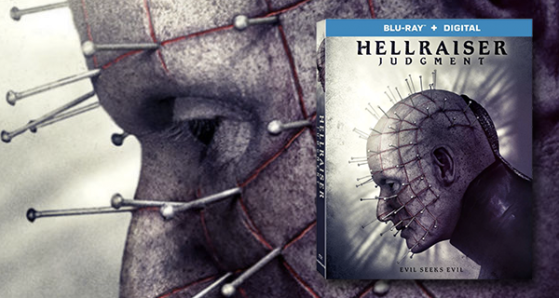 So the newest and latest installment in the “as of lately” disappointing Hellraiser franchise has finally arrived. Fans like myself were not happy at all that Doug Bradley is once again not playing Pinhead, and according to him was not even asked to. The good news is he says he and Clive Barker have been trying to get a re imaging made for quite some time, and as long as he is alive he is willing to play the iconic role. Now if only Robert Englund shared that sentiment as well and would be willing to give us one more outing as Freddy, but that’s neither here nor there right now. After the last two entries in the series, and the fact the director (Gary J. Tunnicliffe) was a make up artist on the previous installment did not exactly send me into this with high hopes. I was read the synopsis a while back and it sounded interesting, then when the first trailer finally arrived I have to admit I was indeed intrigued by it and wanted to see it. 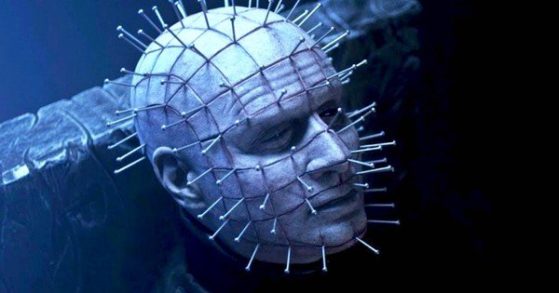 Surprisingly this movie was better than I expected and actually pretty good. I wont say with absolute certainty because I have to watch Hellraiser: Hellworld again, but it absolutely is better than the last installment (not that it would take such an unbelievable attempt to beat). I say I have to watch Hellworld again because it’s been a while since I saw it, and it was the last time Doug Bradley played Pinhead, and also stars Hollywood and horror-genre heavyweight Lance Henriksen, Katheryn Winnick, and Superman himself Henry Cavill which I don’t remember at all. Hellraiser Judgment attempts to take it’s roots back to the dark side, showing Pinhead, his Cenobites, and now current staff (I’ll get to that soon) only exist to dish out true pain and torment to those dark and twisted souls who deserve such eternal punishment. It’s also shown they are a necessary counterbalance between good and evil, and do indeed serve a purpose in the larger scheme of things other than just torturing the wicked or unfortunate souls who happen to cross their path. 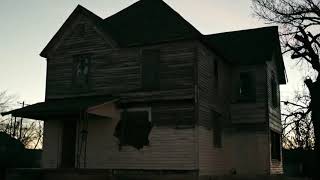 The movie almost feels like two separate stories that were pieced together to form the script and movie, but it does work. The story focuses on two police detectives who also happen to be brothers. They are working tirelessly day in and day out to catch the seemingly impossible serial killer known as “The Preceptor” who murders victims in the most gruesome of ways (for a human) based on the commandments in the bible. While the story is engaging and the acting is tolerable (not amazing but far from terrible), at times it almost feels like a poor man’s Se7en but not enough to make you lose interest. Naturally, at some point during the case both sides do indeed collide and that’s when things get really interesting. With so many horror movies straight to DVD and VOD, and an OVER abundance of serial killer movies – I give the writer/director credit for crafting a somewhat original killer even if it is reminiscent of Se7en slightly, but with his own twisted take on it. Another bonus, like any good Hellraiser movie – the gore is plenty and even unusual or unexpected at times. I was kept waiting until almost the end to see the hooks and chains in action (be patient).

So while the two detective brothers (who are later joined by a new female partner making it a trio) work The Preceptor case endlessly for clues, we are taken into parts of Pinhead and his world. Pinhead seems to have grown bored, and his insatiable appetite for lust, greed and mortal sin is no match for electronics like the internet and more. The puzzle box though still around (multiple in fact), are just basically ancient relics placed on the shelf. However, they are placed on the shelf in an otherworldly residence where humanity’s worst of the worst is lured under the guise of a reward. The first being a child murderer who receives a letter typed on an old type writer asking him to come to the residence, they know who he is and sympathize, and he will be rewarded. Big mistake. 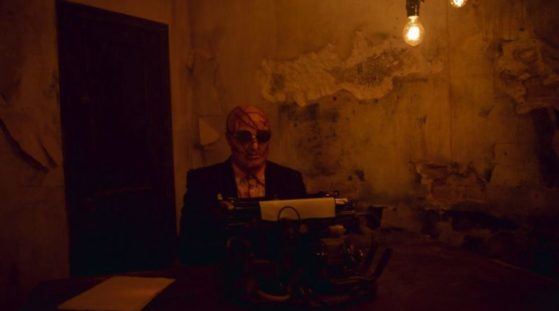 While Pinhead does literally nothing but sit in a chair staring at a wall for ¾ of the movie with a few Cenobites to keep him company, his new staff works hastily. These new entities are comprised of a very disfigured otherworldly entitled called The Auditor (who steals almost every scene) who’s job it is to interrogate the suspect as he types each and every sin said suspect has committed. He also knows anyway and warms them not to lie, as he is aware. Once he has typed (usually a short story to full blown novel) based on the sins and transgressions of said suspect, he leaves and The Auditor arrives (played just right by the writer/director). The Assessor is an obese man who then eats the pages, before regurgitating them into a tube in the wall where they come out soaked in blood and whatever else into the next room. This room consists of 3 naked women called The Jury who decide if said suspect is innocent or guilty. 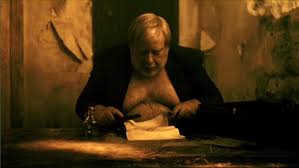 Once a decision has been made (usually guilty), the person is taken to be cleaned (another interesting room and concept) to prepare them to see The Surgeon and The Butcher – two very brutal characters both in physical attributes and actions they take. This building as a hole and these characters feel like a Hellraiser movie. It was darkly morbid, evil, disturbed, and extremely gruesome. I have to give the writer/director credit for trying to make his own mythology to push the series (hopefully forward) for future installments. While I was patiently waiting to see Pinhead and The Cenobites in action, this made up for it along with the level of gore and process each suspect undergoes. I almost feel like the movie could have revolved around this concept more than the outside police story tracking a serial killer only to cross paths here, but it works regardless.

The police are still hunting The Preceptor, and a clue lead detective Sean Carter (rapper Jay-Z anyone?) finds leads him to the house where he is kidnapped and forced to endure this process. Luckily for him, he is one bad son of a bitch and managers to kill a few otherworldly beings and escape to continue pursuing The Precepter. Sean is a shell of his former self, war veteran and married police detective. He is a recovering alcoholic and barely talks to anyone, including his brother partner and his own wife. He must finish this case by any means necessary and nothing and nobody will stop him. After escaping, he managers to steal a puzzle box with plans to use it in the future. Since nobody would believe his story and thinks he is too close to the case as is, he keeps it to himself until the climax. 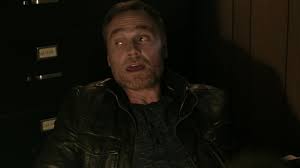 All in all, I think the writer/director did a pretty damn good job in keeping the dark and morbid tone a Hellraiser film should have, the excessive amount of gore and evil lurking (and not), and the atmosphere is just right. It’s always dark, grim, and seemingly evil. When one character is confronted by Pinhead (in one of his rare appearances) I believe he even tells the man “Evil seeks Evil”. This is definitely a worthwhile addition to the franchise, exceeded my expectations, created new mythologies that can be expanded upon, and managed to keep the atmosphere just right for the most part. Looking past a few plot holes and suspending disbelief comes with any horror movie, but he did a decent job limiting that aspect of it. Overall, I would recommend any fan of the franchise to give this a fair chance and go in with an open mind and hopefully forget you saw the last installment and possibly one before that. While it could have been better, I seriously expected much worse so I cannot complain. It held my attention and I left not feeling like I wasted almost an hour and a half of my time. Lastly I just wanted to add, even though it’s his first outing I was not upset or mad at Paul. T Taylor for his portrayal of Pinhead. While he is no Doug Bradley, he is EONS above the last actor who attempted it, and seems to get, grasp and comprehend exactly what Pinhead is, and his soul purpose for existing. I thought he did a good job considering.

The morbid place that Pinhead and his minions come from and dwell was atmospherically dark and well done. You can tell the director is passionate about this project, and really admires Clive Barker wanting to make him proud (including a special thank you to him at the end of the credits). The police case and human story developed into a stronger story as the story progressed, and the inevitable interaction that brought them into the other world was well done but just a bit too late in my opinion. Overall, the movie was solid and I applaud first time writer/director Gary J Tunicliffe who also did the make up as well. He was clearly passionate about the story and characters, admired and did his homework on the mythology and took a big risk trying to expand upon it. You can tell he put a ton of thought and specifically time on this prior to even beginning shooting let alone pre-production. All said and done, the movie was good, exceeded my expectations and was a tremendous step up from the last installment (or two but as I said I have to rewatch Hellworld). My only complaint is that I feel Pinhead and the Cenobites did not get even remotely enough screen time. With that being said, I can certainly see another sequel being greenlit, but Im hoping one of the studio heads will finally listen to Clive Barker who has been sitting on a new screen play to reinvigorate the franchise and bring back Doug Bradley. Either way, this is a step in the right direction in my opinion.