I am sure many of our readers are aware that the epic “Phantasm” franchise has been released in various versions of different boxsets over the last few years. Especially because of the release of the most recent installment “Phantasm V: Ravager”. However, what you MAY not know, is that a NEW boxset is in the works! This BRAND NEW Phantasm blu ray boxset will be arriving in France with no official release date as of yet. One thing we DO know is that there will be an amazing tribute to the late great lead villain from the films Angus Scrimm.

The tall man is being honored by having a mini bust statue of his upper body lunging out holding the well known metal sphere. Underneath the bust is a bold lettering that reads “Phantasm”. The backdrop of the bust and the casing for which holds the blu rays themselves is made to look like tomb cement, similar to the walls of the morgue in the original Phantasm film.

ESC Distribution will be handling the release of the boxset.

“ESC Distribution has teased that their set will pack a ton of bonus features as well as a new 200-page book written by Marc Toulec. ESC is also reporting that this incredible release will be “limited to 300 certified and numbered copies.” And here we thought Well Go and Arrow’s 10,000 run Blu-ray sets were scant!”

Hopefully more details of this release surface soon and we can deliver a solid release date on this as well as more details on what will be included with the boxset and the features as well! Stay tuned to Horror Headquarters for more updates! 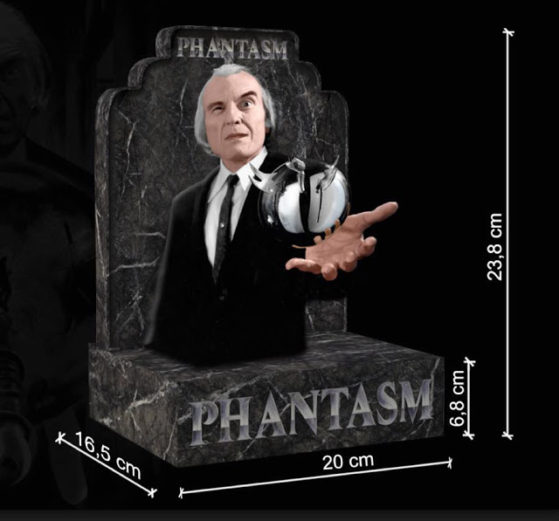