Bad Apples is a 2018 horror film written, produced, & directed by Bryan Coyne (Harvard Park, Infernal, & Utero ). It was shot by horror veteran cinematographer Will Barratt (Hatchet franchise, Spiral, Frozen, Chillerama, Holliston, & Horrified). It all started out on October 31st when a pregnant woman opens her door for trick-or-treaters for the Halloween tradition. Soon after a man sneaks into her place while she’s away & hides in the kitchen. As the woman returns she is repeatedly stabbed in the stomach by the intruder. He says to her “You had no right”! She quickly responds “they’re yours” to the man as he jabs the knife into her multiple times. As everything starts to pull away from the opening disaster as another man walks in saying “Honey, I’m home”. It flashes forward to present day, 15 years later on October 30th where you meet Mrs. Block (played by: Brea Grant from “Heroes”, Rob Zombie’s “Halloween 2”, “Dexter”, & “A Ghost Story”). She moved to this small town from Los Angeles. She’s checking out her new school where she starts on Monday with Principal Dale (played by: Richard Riehle from “Hatchet”, “Casino”, “Ferris Bueller (TV Series)”, “Office Space”, & “Grounded for Life”). 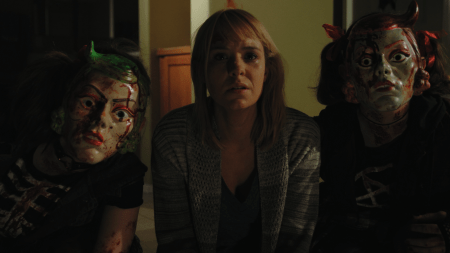 A religious man warns her that this new smaller town isn’t that different from teaching in California. The next day, Mrs. Block tries to convince her husband (played by: Graham Skipper from “Almost Human”, “Tales of Halloween”, & “Beyond the Gates”) to help her organize all their stuff but he doesn’t want to help & leaves. Miss Decker (played by: Diane Goldner from “Feast 1 & 3”, “Pulse 2 & 3”, Rob Zombie’s “Halloween 2”, “The Collector”, & “Hatchet 3”) welcomes Mrs. Block to the neighborhood & warns her about the bad apple Samuel (played by: Miles Dougal from Director’s Cut, Chillerama, 2001 Maniacs: Field of Screams, & Psycho Cop Returns) who is a registered sex offender. Two mysterious girls in masks start to terrorize the community on Halloween. Various members of the community start dying in a variety of brutal ways. They want to punish anyone who isn’t celebrating their favorite night of the year! Mrs. Block is just trying to get her new home organized when trick or treaters keeps knocking on her door & repeating “Trick or Treat”? She acts rude to the strangers & it turns out to be the wrong kids at the wrong time for her. They break in after she makes them angry, can she defend herself against these little real life monsters? or Will they find a new sacrifice for Halloween????

Director Bryan Coyne delivers a GOOD mix of evil kids & home invasion sub-genres with this Halloween tradition film. I can see Bad Apples getting added to your yearly watch list for the Holiday & October watch lists. Just think about it, Creepy twins in masks that are killing people off in various gruesome ways on Halloween? That little summary alone sells me on Bad Apples as something to check out. How about you? Speaking of killing, it has one of the most unique kills that I’ve seen in a horror in awhile plus some solid special fx. It has a nice flow to it so there’s never a dull moment, it’s a very fun & entertaining independent feature. Sometimes with direct to video & low budget horror, it’s hard to find something worthwhile with all those options out there these days but this one stands from out. It actually lives up to it’s cool cover & poster artwork. Creepy kids in a slasher setting on horror’s favorite day, it’s a nice blend of all the morbid stuff you enjoy from the genre. It had the great experience of DP Will Barratt who made it look like it had a much bigger budget, it all around had the perfect atmosphere for when it was set. Especially recommended for fans of The Strangers & the Purge franchises because it has those similar vibes to it. It’s now available On Demand & DVD from Uncork’d Entertainment. Double the terror on Halloween. They’re rotten to the core, CHECK IT OUT!!!!