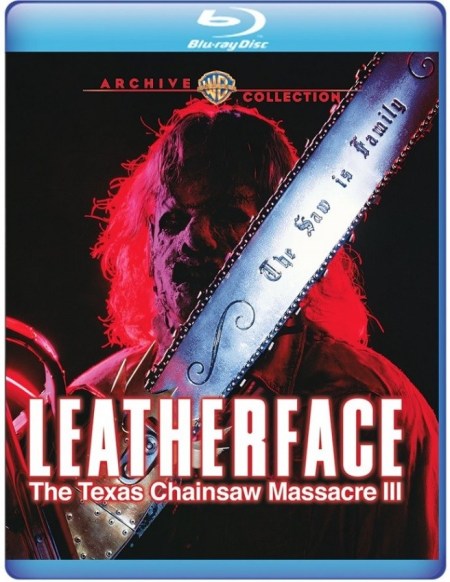 Leatherface: Texas Chainsaw Massacre III is a 1990 horror film directed by the master of the horror sequel Jeff Burr (Stepfather II, Pumpkinhead II: Blood Wings, Puppet Master 4/5, From a Whisper to a Scream, & Night of the Scarecrow). It was the 2nd sequel in the beloved Texas Chainsaw Massacre/Leatherface universe. It was the first TCM film that wasn’t directed by horror legend & creatior Tobe Hooper. It was also the first TCM film that wasn’t shot in Texas, it was filmed in California. It featured a completely different family. After the first two entries in this dark world became a success, rising studio New Line Cinema aKa “the house that Freddy built” decided to take a chance on this franchise by purchasing the rights from the infamous Cannon Group & they were hoping to bring it to the next level! Originally, they contacted Peter Jackson who was getting lots of notice at the time to direct this. Obviously nothing ever happened between those negotiations but later on he would do films that made New Line a major studio in Hollywood. New Line was heavily involved with the production of this film unlike the previous two. This lead to the script being changed, it was originally more violent & featured additional explicit gore sequences. After test screenings, a re-shoot took place which included a different ending from what was planned & filmed. Burr was fired & re-hired towards the end of making this. Most of the gore, deaths, & suspenseful scenes were trimmed. It was the final film to receive an X rating before it was replaced with with NC-17. It was submitted to the MPAA 11 different times trying to get a R Rating which was a record at the time. That caused TCM 3’s release date to be delayed & pushed back. It was #11 at the Box Office during it’s opening week & failed to be a success after all the previous issues. Jeff Burr didn’t have any contact with New Line until 2003 over this disastrous production. Horror Icon Kane Hodder was the stunt coordinator on Leatherface: Texas Chainsaw Massacre III & he was also the stunt double for the main character during some scenes. He also played Leatherface in the AMAZING promotional trailer for this sequel. Original Leatherface actor Gunnar Hansen was the first one to be offered the role but turned it down due to not coming to an agreement on pay. The chainsaw in the movie weighed approximately 80 pounds. Caroline Williams from Part 2 has a cameo as a reporter. The house from this movie was also used in Alice Cooper’s “House of Fire” music video. Luckily, part 3 got a NEW life with home video & finally got a proper release that wasn’t butchered/censored on DVD years ago!!!!

Junior (played by: R.A. Mihailoff from “Trancers III”, “Pumpkinhead II: Blood Wings”, “Hatchet II”, & “Death House) aKa Leatherface (He’s never referenced as that name in the feature) messes with human flesh trying to make a new face for himself. The bickering duo that consists of Michelle (played by: Kate Hodge from “Tales from the Crypt”, “The Hidden II”, & “Rapid Fire”) & Ryan (played by: William Butler from “Friday the 13th Part VII: The New Blood”, “Ghoulies II”, “Night of the Living Dead”, & “Arena”) from California are on a road trip delivering a car to Michelle’s father in Florida. They stop at the Last Chance gas station, they run into drifter Tex (played by: Viggo Mortensen from “Prison”, “The Indian Runner”, “Carlito’s Way”, “The Prophecy”, & “Psycho”) & local weirdo Alfredo (played by: Tom Everett from “Friday the 13th: The Final Chapter”, “Prison”, “Death Wish 4: The Crackdown”, & “Best of the Best”). Ryan decides to take Tex’s advice & takes an unknown shortcut that’s not on the map. They confronted by a psychopath with a chainsaw which makes them crash into Benny (played by: Ken Foree from “Dawn of the Dead”, “From Beyond”, The Dentist”, “Halloween”, & “The Devil’s Rejects”). Benny sees a stranger Tinker (played by: Joe Unger from “A Nightmare on Elm Street”, “Barfly”, “Road House”, & “Pumpkinhead II: Blood Wings”) with a tow truck.  Michelle finds a house near by & she’s looking to find some help. She sees a little girl (played by: Jennifer Bank from “Friday the 13th Part VII: The New Blood” & “Barb Wire”)” in there plus rest of the cannibalistic family which includes Grandpa & Mama (played by: Miriam Byrd-Nethery from “From a Whisper to a Scream” & “Stepfather II”).  Can these strangers survive these real life monsters???? 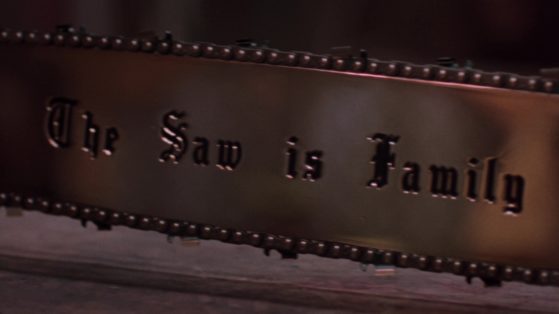 Leatherface: Texas Chainsaw Massacre III is highly under-rated! It’s my personal favorite sequel from the TCM franchise. Don’t get me wrong, 2 was top notch but I thought it tried too hard to be funny at times & that kinda became a distraction for the overall production. Jeff Burr made sure to take the horror series back to it’s original roots with this follow up! This is very brutal, dark, & unforgiving film. Unlike the entry before, it doesn’t have much comedy in it. I actually enjoyed that they changed Leatherface’s family in this sequel. It added a new twist to everything, they were completely different compared to the original members. The cast really boosted the production value here. Some you might recognize from several other genre projects. Some of them were sleazy & very unlikable, the performances were on point. More than a few were smaller & unknown so they came off more realistic with their roles. Viggo Mortensen obviously has moved on to much bigger movies these days & he’s easily the most known actor in this. He was willing to do anything back then & it shows with this darker turn. This has some really gruesome death scenes & the practical FX were top notch in Leatherface. So get ready for some nasty gore plus it has a nice heavy metal vibe for the soundtrack so it adds more energy to everything. It’s a shame this one didn’t get a true follow up because I really enjoyed how this was put together. Hopefully more horror fans will give this a chance since it’s now available in this format because it’s honestly deserves more attention, HIGHLY RECOMMENDED!!!! 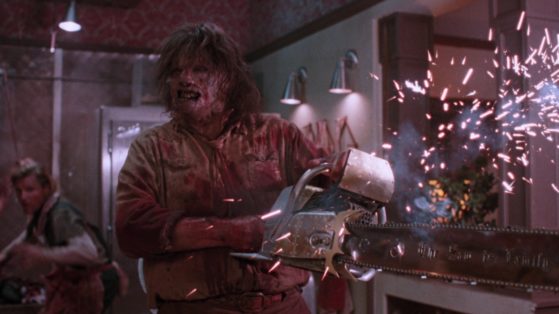 Let’s talk about the high definition presentation from Warner Archive! This 1080p (1.78:1) transfer is a huge upgrade compared to all the past releases. I know there’s some controversy about some of the night scenes from it but I didn’t see any issues on my set up. I’ve seen this film in almost every format that it’s been released in which includes at the Drive In, VHS, DVD, & now this blu ray! As far as I know, the only format I haven’t seen it on was Laserdisc. So after countless viewing experiences I can confirm that this is the BEST that Leatherface: Texas Chainsaw Massacre III has ever looked on home video. Jeff Burr had some additional/unreleased special features for this release but unfortunately they weren’t used but Warner Archive listened to all the fans & made sure they released the feature UNCUT like it was meant to be! The English: DTS-HD Master Audio 5.1 track sounds great here. The dialogue is crystal clear, all the suspense is elevated, & the heavy metal soundtrack plus the score sounds AWESOME! The previous DTS 6.1 & the original stereo mix from the DVD were not included on here. It also has English SDH subtitles. 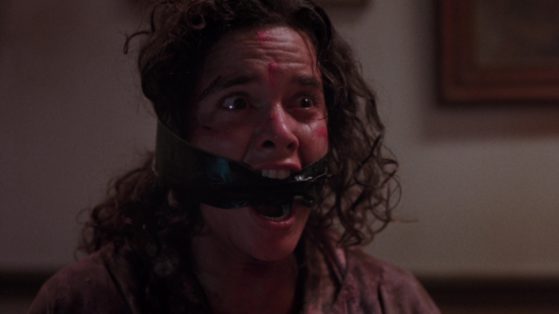 Let’s  discuss the special features from Warner Archive! W.A.C has included all of the previous extras that were on the New Line DVD. “Audio Commentary” with director Jeff Burr, writer David J.Schow, special FX artist Greg Nicotero, New Line production executive Mark Droesky, actors William Butler, & R.A. Mihailoff. Jeff Burr is one of the most informative filmmakers you can listen to when it comes to audio commentaries. He has all kinds of behind the scenes information & stories about the production. It sounds like it was hell making this feature but it turned out great. This is a VERY fun & entertaining track that gives you a deeper look into this sequel. “The Saw is Family: Making Leatherface” is a 28 minute featurette that discusses everything from the pre-production, filming, & to the history of Leatherface: Texas Chainsaw Massacre III. It has interviews with Jeff Burr, William Butler, Robert Engelman, R.A. Mihailoff, Greg Nicotero, David J. Schow, & various other members of the production including some archival chats with more of the cast. “We Know What to Do with Them Parts: Deleted Scenes” documentary runs almost 10 minutes. It features all kinds of extended/lost scenes with discussions from the crew. It also includes the infamous “Alternate Ending” that is a little over 5 minutes. It definitely puts a different spin on things. Last but not least is the AMAZING promotional “Teaser Trailer”! I’ve lost count how many times I’ve watched it over the years. It’s pure marketing genius & it’s so much FUN! I don’t think anyone is going to be miss it but the theatrical version is only available on the DVD & it wasn’t ported over for this release. This is easily my personal favorite blu ray release from 2018. I am hoping to see much more horror related releases in high definition from Warner Archive in the future because it’s an exciting time to be a movie collector right now. Leatherface: Texas Chainsaw Massacre is available everywhere right now, CHECK IT OUT!!!!