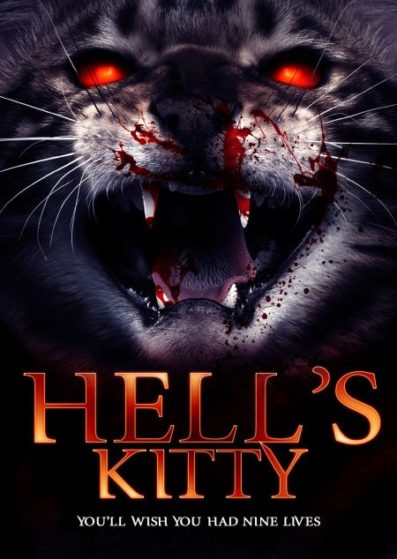 All Star Horror Cast? Evil Pussy? Nightmares? Horror Comedy? Hell’s Kitty was adapted from a web-series from 2011 to 2015 that’s known for doing parodies for classic horror films which included cameos from many familiar faces from the beloved genre. Creator/Writer/Director/Actor Nicholas Tana (Original Hell’s Kitty web series, The Director, & Sticky: A (Self) Love Story) also wrote a comic book based off the web-series/characters called “Cat Scratch Fever”. It’s available for FREE on Amazon Prime if you are interested in checking it out. The concept alone will get your attention, a jealous possessed cat won’t let anyone near it’s master & will KILL to be number one in his life. It basically sounds like if Christine was a cat instead of a car & it had a little more comedic vibe to it. 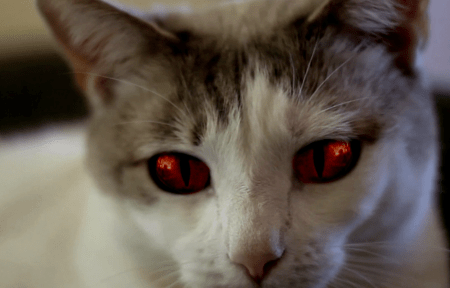 The film opens with a close up to a cat (Angel) then shows you a van full of dead women. This is where you meet Nick (Nicholas Tana), who says “I know what this looks like but it’s not my fault! It’s my cat ANGEL!” Nick moved to Los Angeles to become a Hollywood writer. He was desperate to find his muse for inspiration. He gets a visit from Lisa Graves (Lisa Younger), she notices his Stephen King books right away & he jokingly introduces his cat Angel as Cujo. Nick starts warning Lisa how Angel gets extremely jealous around females. When Lisa goes over to pet Angel she gets attacked & scratched instantly. Blood is all over her arm & the cat, she quickly leaves Nick’s place. His friend Adam (Adam Rucho) shows up after running into her outside. He looks at Angel & he says “There’s nothing worse than bloody pussy”.

Later on, Nick has a weird dream & wakes up to a pentagram on his mirror. He randomly all the sudden has facial hair. He also finds Angel in the kitchen with another pentagram. Lisa calls & threatens to sue him over the incident earlier. He hears a girl screaming from outside & finds what appears to be blood under her door. Turns out it’s his new neighbor & she’s a special effect artist. Adam recommends he needs some professional help after hearing him about his problems with Lisa. He meets up with Ms. Rommel (Nina Hartley) who he assumed was going to be a lawyer after all this but no she’s a “sexual stress relief specialist”. Angel can’t stand to see this so she has a stare down with Ms. Rommel that turns DEADLY! After hearing someone screaming in Nick’s apartment Adam decides to show up to see what’s going on & for some reason he has a camera. They look around & find Angel with some remains which leads to another clever one liner.

Later on, Nick has another nightmare which involves a dead Ms. Rommel & she rips his heart out! His cat Angel starts eating it on the floor before he wakes up from this weird vision. Nick decides to hire a therapist Dr. Laurie Strodes (Nina Kate), mainly because she’s hot & she makes house calls. She explains his issues with his possessive cat & what she thinks is really going on. After therapy, Nick spends some quality time with Angel to see if that helps his problem with her jealously. He has a nightmare of Angel biting Strodes’s fingers off. Nick tells Strode more about his consistent nightmares. A blood soaked mutilated woman is in the bathtub with him ripping off her flesh & feeding it to him. Strode tells Nick he is sexually frustrated & Angel is causing him to stay away from interaction with women. Detective Pluto (Michael Berryman) shows up to Nick’s place & says he’s investigating the disappearance of Lisa Graves. Soon after, Nick tries to meet his new mysterious neighbor but no one is there. Nick runs into his Ex’s Rosemary’s mother (Adrienne Barbeau) & finds out she is dead. 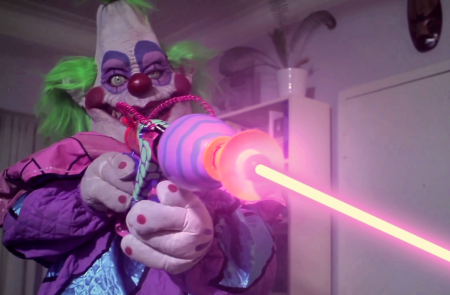 She leaves her daughter’s diary which made it clear she hated Angel & wanted to put a curse on the cat. While Nick is sleeping Angel gets into a fight with one of Clowns (Charles Chiodo) from “Killer Klowns from Outer Space” (Yes, you read that correct! This kinda gives you the idea how random this film is). Lisa shows up to Nick’s place looking damn near dead. She pulls a gun on him & she starts tearing off her flesh. She tortures him a little bit then leaves. Angel has gone missing & Nick is losing it without his loyal pet. Nick tries to hook up with Dr. Strodes but gets rejected after making out a little. Angel gets jealous then follows her home & digs out her eye. Adam confesses that he made up the new neighbor & that it was him all along. He admits to being the one who’s been messing with Nick’s mind all this time. Nick finds two priests (Doug Jones & Bill Oberst Jr.) & convinces them to perform an exorcism on Angel because he thinks she is possessed! Both men fail & Nick is back to where he started.Two religious men (Courtney Gains & John Franklin) go to Nick’s apartment & try to preach to him (Remember Children of the Corn?) 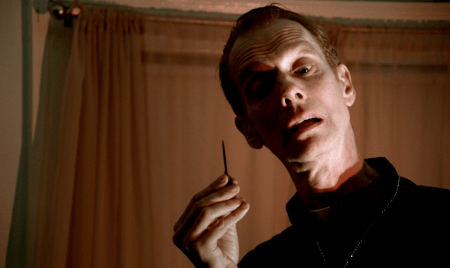 They are basically revisiting their roles from that) but end up running out due to Angel attacking one of them. Nick can’t take these problems anymore & tries to kill himself. EPIC FAIL like all the other previous events in this. Adam loans him money to hire two Mediums (Lynn Lowry & Kelli Maroney). They transfer Angel’s demon to a stuffed ram but somehow Adam ends up the one possessed! Adam kills one of the Mediums. Adam sacrifices himself to stop the evil but Rosemary (Dale Midkiff) appears after all the chaos. Angel saves Nick from the evil Rosemary. Some time after, Lisa comes back looking normal tries to poison angel but it ends drinking the deadly milk instead. Nick runs into the other Medium. She puts a CURSE on Angel for revenge for her sister. Angel kills bus full of women, it all starts over again….

Hell’s Kitty was a very low budget film & the visual effects were honestly awful but I guess it adds a little charm to it since it’s a comedy. Horror fans it also features enough gore & murder to wet your appetite. I appreciate a good mix of horror & comedy. I was really impressed with the dialog for this independent feature from Wild Eye Releasing. Lots of parodies of classic horror & references to previous work of all the known horror cameos in this. That’s the main thing that’s going to make you want to check this out especially if you are a big fan of the genre. The script is full of hilarious one liners that crack you up instantly. I could see a few shirts being made with quotes from this film. This one keeps you entertained the whole time & it has you asking “What the fuck is going to happen next”? Hell’s Kitty’s hits Video on Demand March 13th & DVD on March 27th from Wild Eye Releasing, check it out!!!!