Casting and Scoring Details on the Upcoming “Puppet Master” Film

If you have been following the “Full Moon” world you already know that a NEW “Puppet Master” film is on the horizon. “Puppet Master: The Littlest Reich” is being penned by S. Craig Zahler, The same genius behind “Bone Tomahawk” and “Brawl in Cell Block 99”, two of my more favorite recent genre pieces. However, what you may NOT know is that the legendary maestro of horror scores himself, Fabio Frizzi, will be scoring the new film. Frizzi is well known for his work in MANY Italian horror films of the 80’s and even more modern pieces as well. His sound is a kin to moog and synth compositions of retro feel and sound. I personally am a huge fan of his work and will be looking forward to his contributions to the film.

“Puppet Master: The Little Reich centers on a recently divorced young man who discovers a mint condition Blade doll in his deceased brother’s closet and plans to sell the toy at a convention in Texas celebrating the 30th anniversary of the infamous Toulon Murders. All hell breaks loose during the auction when a strange force animates all of the various puppets throughout the convention as they go on a bloody killing spree.” 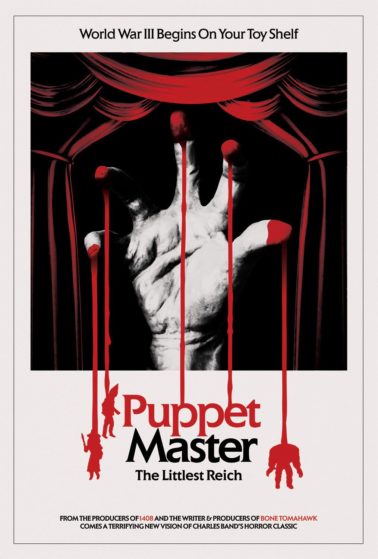 The casting in this film looks to be pretty impressive as well. Perhaps the best casting to date for a Puppet Master release. The cast includes legends like Udo Kier and Barbara Crampton as well as Thomas Lennon, Jenny Pellicer, Nelson Franklin, Charlyne Yi  and Alex Beh. The film is being said to be a REBOOT rather than an actual sequel, time will tell the true intentions of the film. At the moment there is no release date information and a trailer has not yet surfaced. However, we will continue to follow this story as it develops. Are you excited for a new Puppet Master film? Let us know in the comments below!