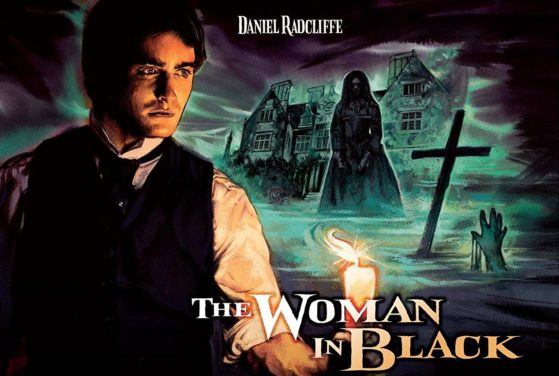 It was a bold move of Daniel Radcliffe to jump straight from the Harry Potter franchise to horror movies, and especially when it was a remake of the legendary ghost film, The Woman In Black. Doomed by most fans of the original before they even started filming, they had a big task ahead, so did they succeed? Does the remake suck compared to the original like most recent remakes do, and is it possible to get scared by a film starring Harry Potter if you’re more than ten years old? Let’s find out.

Plot:
This remake starts off way different than the original. Three girls are playing in their room but the vibe’s not quite right. It’s like they’re possessed or something, and indeed. They walk to the window, line up side by side, jump out, and die.

Next it’s pretty much where the 1989 version started with Arthur Kipps (Daniel Radcliffe) being the young solicitor assigned to settle the deceased Mrs. Drablow’s secluded estate in the gloomy british countryside, and once there, a mysterious lady dressed in black starts appearing, increasingly scaring the bejesus outta Kipps, and then she gets nasty.

What’s good:
Classy stylish old school horror, but updated to suit today’s technical standards of film making without losing the feel of it happening a long time ago.

They did a great job making sure people got scared when watching as it’s at times frightening, and very much so.

The effects are good, the jump scares will at times tear your soul apart, and they’re done in moderation. Picture that for a modern big budget horror film!

The woman in black is nasty, ugly, scary, evil, and she creeps up on you.

What’s bad:
Some of the cgi looks a little fake, but then again this was made in 2012, and cgi’s come a long way since then.

Towards the ending it builds suspense like crazy, but when the scares drop, they could’ve dropped harder, so a bit of a missed opportunity there.

A remake of a near perfect ghost film was unnecessary, right? Or was it?

The verdict:
I was more than pleasantly surprised cause this is one of the best horror flicks made after 2000. They upped the ante in a lot of ways compared to the original, stayed true to it’s style, and story, but updated it in a good way, the scares of a modern blockbuster of course bangs a lot harder than an old movie made for tv, and especially the sound of the jump scares will send you through the roof if you blast the volume.

Where they fail is some questionable cgi, the woman isn’t as scary as in the original, and some of the shocks in the 1989 version hit harder despite them not being as technically perfect as in this film, and that’s my main problem with modern movies compared to back in the days. That they’re tech perfect now but they’re missing originality, plots, and characters, to care about.

That said, the woman in black remake delivers, is the best post 2000 example of a classic ghost movie, and one of the best horror remakes as well, plus the ending is mad creepy, and lets you know that the woman in black isn’t done, and might STILL be coming for YOU next!

And she returned in the follow up that sucked, so nobody’s seen her since, but hey, you’ll never know. Have you checked that all your doors, and windows are properly locked tonight, and are you sure that dark shadow on the corner of your neighbor’s house isn’t more than just a shadow? I’d check again if I was you.