The Return of Netflix’s Castlevania 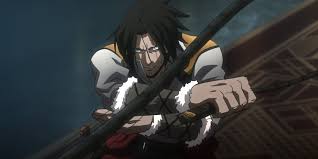 Castlevania is a very well known video game franchise with an incredibly large and diverse fan-base. So needless to say, once an anime series was announced fans of the franchise went nuts! The first season dropped in July of 2017 with a measly four episodes. Many of the fan-base were pleased with the quality of the anime, however, felt that this wasn’t enough and were, of course, hungry for more. Netflix took to Twitter to promise 8 more episodes, but they failed to mention a return date.

A rough five months passed with desperate fans trying to find any information they could about season 2 of Castlevania, failing in the process. Come January 19th. 2018; Warren Ellis, the writer of the first season of Castlevania, takes to Twitter and confirms to many impatient and hopeful fans that Castlevania would return in the summer of 2018. Although no exact date was given, this was certainly amazing news for many fans who were worried that the series had potentially received a silent cancellation from Netflix staff. Hopefully season 2 delivers as much awesome badassery as the first season!

One thought on “The Return of Netflix’s Castlevania”