“Day of The Dead: Bloodline” Gets DVD/Blu Ray Release Date 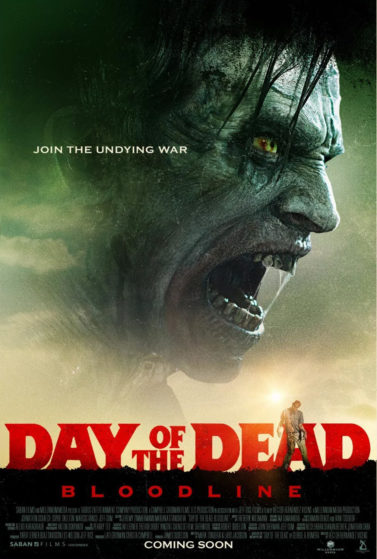 A brand new re-imagining of the classic film “Day of The Dead” hits VOD, Blu Ray and DVD on February 6th 2018. Now I have personally skimmed through reviews of the film and they are truthfully NOT looking great. However, I am a HUGE Romero fan and a fan of the franchise and furthermore, I am a MASSIVE “Day of The Dead” (1985) fan. This one also has VERY dope art that utilizes the original font from the OG DOTD film and has a grimy zombie face, that I am assuming is the BUB like character of the film.  Granted, this does not by any stretch deem this a GOOD movie, I have not seen it so I can not speak on it. BUT those things to allure me to the film.

The basic plot is stated as: “A small group of military personnel and some survivalists dwell in an underground bunker as they seek to find a cure in a world overrun by zombies, which the others have dubbed ‘Rotters'”.

The cast for this film includes:

The film was directed by Hèctor Hernández Vicen, a newcomer to the world of horror with this being only his second movie he directed. Originally slated for a 2017 release as it was film in 2013. It will not be dropping obviously, until 2018.  You can get a preview of whats to come by checking out the trailer for “Day of The Dead: Bloodline” below.