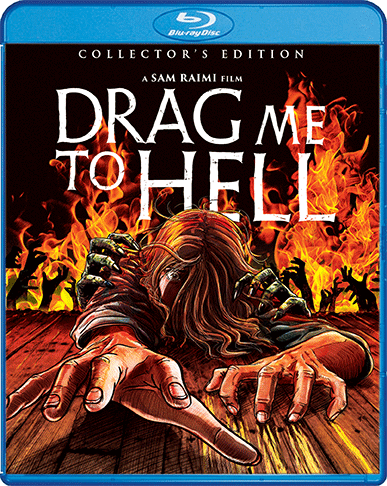 When the movie was first announced, Sam Raimi’s Drag Me to Hell was met with plenty of fervor and jubilation within the horror community. At long last, the man behind the great Evil Dead and Darkman trilogies was returning to the genre after spending the intervening years working in Hollywood’s mainstream world and promised to go all-out in delivering plenty of his usual antics and genre thrills. Although the final product was met with decent results, it’s become a minor cult hit with its own fanbase.

Now, boutique label Scream! Factory is busting out all the stops with a spectacular 2-disc Collector’s Edition release on Blu-Ray. Limited Edition orders from the site includes a free 18×24 poster of their newly-commissioned cover artwork alongside a copy of the film two-weeks early, while supplies last.

Synopsis
Christine Brown (Alison Lohman, Officer Downe) is on her way to having it all: a devoted boyfriend (Justin Long, Jeepers Creepers), a hard-earned job promotion, and a bright future. But when she has to make a tough decision that evicts an elderly woman from her house, Christine becomes the victim of an evil curse. Now she has only three days to dissuade a dark spirit from stealing her soul before she is dragged to hell for an eternity of unthinkable torment. Director Sam Raimi (The Evil Dead Trilogy, Darkman) returns to the horror genre with a vengeance in the film that critics rave is “the most crazy, fun and terrifying horror movie in years” (Owen Gleiberman, Entertainment Weekly)!